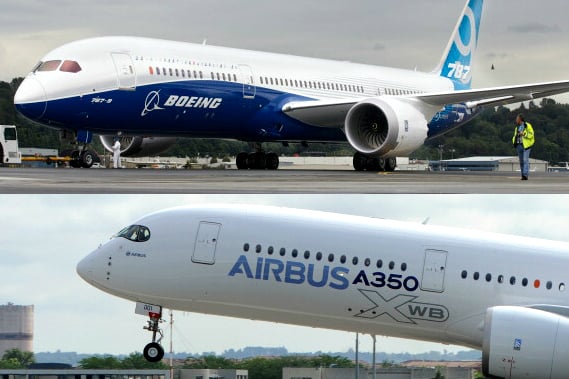 Drained by their contest to create the carbon-fibre wonder jet, Airbus and Boeing are observing a truce in futuristic new developments while they refill their coffers with makeovers of older but reliably profitable models.

The two companies have gone head-to-head with their costly carbon-fibre experiments – the wide-body Boeing 787 Dreamliner and Airbus A350 – but are now recognising the need to take stock.

Airbus group CEO Tom Enders showcased the A350 to Chancellor Angela Merkel at the Berlin Airshow this week, but has warned the industry can no longer afford to “bet its shirt” on game-changing projects that “lead to a crazy game of chicken with the competition and leave nothing to pay the bills”.

US rival Boeing is also trying to juggle the blistering pace of technology that gave birth to the world’s first carbon-fibre jetliner with a sober message for investors.

Investors have responded positively, pushing shares to record levels after both planemakers successfully applied a similar revamp strategy to their top-selling narrowbody jets.

“The pendulum is swinging back from high science to return on investment, and nothing provides almost guaranteed returns like derivatives of successful jets,” said Richard Aboulafia, vice president of analysis at Virginia-based Teal Group.

Airbus is fine-tuning plans to put new engines on the A330 long-haul jet – its second main cash cow after the A320.

A surge in A330 orders triggered by delays to the 787 has slowed down, threatening a drop in deliveries from 2016 if Airbus takes no action to improve fuel efficiency.

Its cash pipeline has already been squeezed by the $15-billion A350 and heavy overspending on earlier programmes such as the A380 and military A400M.

Airbus is expected to make a decision later this year, though there is a slim chance it will come as early as July’s Farnborough Airshow. The “A330neo” could enter service in 2018.

Complicating the decision is an unresolved internal debate on whether to offer one choice of engine or two, with Rolls-Royce and General Electric in the race.

A single choice of engine is cheaper and easier to produce, since the engine maker will take more of the risk, but it is less popular with airlines. Negotiations between Airbus and engine makers are expected to intensify in coming weeks.

The head of the Airbus planemaker division, Fabrice Bregier, is seen as cautious about authorising new R&D spending that might hamper a broader drive for improved margins, but said on Monday he was warming to the idea of overhauling the A330.

Less advanced, but starting to gather pace, are proposals to place new engines on the 525-seat A380 superjumbo to boost the economics of the world’s largest passenger jet from 2020-2021 – a timetable that would need a decision within one to two years.

An executive at leading A380 customer Emirates said it would place more orders if Airbus made such a move, which could be carried out in conjunction with Rolls-Royce.

The two proposals are designed to prolong a vital source of cash in the case of the A330 and prevent the A380, Europe’s iconic but slow-selling superjumbo, from hampering profits.

“On our estimates, almost half of the profitable dollars at Airbus are represented by the A330, and more than half when adjusting for A350 losses and R&D,” said Nick Cunningham, managing partner at UK-based research firm Agency Partners.

On the U.S. side, Boeing recently launched a more detailed revamp of its cash-generating 777 mini-jumbo. The 406-seat 777X will combine new engines with carbon-fibre wings and is due to enter service in mid-2020.

The proliferation of makeovers has led to a change in tone. “Disruptive” technology has gone from the PR lexicon, judging by this week’s Berlin event, to be replaced by “incremental”.

That doesn’t signal any let-up in the companies’ fierce rivalry, however, as what is ‘cash positive’ for one is often ‘cash negative’ for the other, in the duopoly between the world’s largest planemakers.

The more an A330neo generates cash for Airbus, the more harm it could do to the 787 by forcing Boeing to discount, analysts say. And the 777X poses the same threat to the A350 and A380.

It appears no accident, therefore, that Berlin also saw another burst of rhetoric in the world’s largest trade row, with Bregier slamming Washington state tax credits for the U.S. aerospace industry on the eve of the show.

Airbus says the “unacceptable” $8.7 billion package would alone cover the costs of the 777X. Boeing denies this and says Airbus benefits from unfair government loans in Europe.

Senior industry strategists say the planemakers’ decade-old and ill-tempered World Trade Organization dispute over mutual allegations of illegal government subsidies is not just about politics but is just another leg of their battle to restrict the other’s funding. Both companies insist it is purely about restoring a ‘level playing field’ for competition.