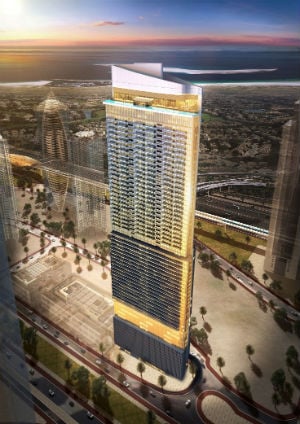 Luxury property developer Damac has launched Paramount Residences at the Paramount Tower Hotel and Residences, a new hotel in Dubai.

The project is an 826-key luxury hotel and hotel residences tower on Sheikh Zayed Road.

About 64 storeys-high, the hotel will have a sky lobby with views of downtown Dubai, a private Paramount Pictures screening room, and a rooftop infinity swimming pool with a terrace, fitness centre and a spa.

Prices for the hotel residences, which will be located on the 36-64th floors, will start at Dhs 1,800 per square foot.

The hotel rooms and suites in the project are designed using the Paramount Pictures brand with each fully furnished unit including an access to a film library of over 3,000 titles.

The residences also have separate living and dining areas combined with Paramount Hotels & Resorts’ amenities and service. Units are available in one, two and three bedroom options, in addition to two penthouses.

“As the number of tourists to Dubai continues to outpace most of the world, there is a huge demand for quality, stylish and luxury living experiences, both with hotels and the high-end hotel apartments sectors,” said Damac Properties managing director Ziad El Chaar.

“Paramount Tower Hotel & Residences will bring to life the Hollywood glamour and California cool lifestyle synonymous with Paramount Pictures in an environment which is stylish and aspirational.”

Damac Properties already has a number of projects under construction with Paramount Hotels & Resorts across the Middle East.

Damac, which was badly hit during the 2008 real estate crash, has rebounded strongly with several major projects now under construction. The company has also diversified into hospitality sector launching a number of projects last year.

The property firm, however, reported a 38 per cent fall in first quarter net profit this year despite surging revenues.

Damac later said the first-quarter and the 2014 profit figures were not comparable since the company had acquired its real estate operating interests, named Damac Real Estate Development Ltd, only in the second half of 2014.