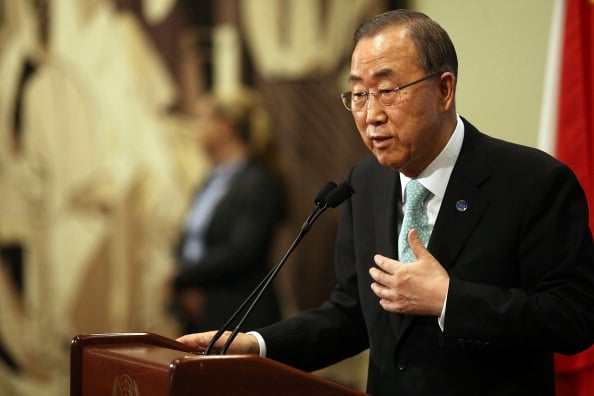 The ceasefire between Israel and Hamas militants in Gaza has come at almost too high a price as the death and destruction from nearly a month of fighting has “shocked and shamed” the world, U.N. Secretary-General Ban Ki-moon said on Wednesday.

A Gaza truce was holding for a second day on Wednesday as Egyptian mediators pursued talks with Israeli and Palestinian representatives on an enduring end to a war that has devastated Gaza, a coastal enclave of 1.8 million people.

“We must spare no effort to turn the current calm into a durable ceasefire that addresses the underlying issues of the conflict,” Ban told an informal meeting of the 193-member United Nations General Assembly. “This ceasefire has come at a price that is almost too much to bear.”

Ban called for an end to rocket fire from Gaza and weapons smuggling as well as lifting an Israeli-Egyptian blockade on Gaza and bringing Gaza back under one Palestinian government that accepts and adheres to international commitments toward peace made by the Palestine Liberation Organization.

Hamas seized the Gaza Strip in 2007 from forces loyal to Western-backed President Mahmoud Abbas, whose Fatah faction dominates the Palestinian Authority-run West Bank. In April, Fatah and Hamas, which advocates Israel’s destruction, announced a unity pact and in June, Abbas swore in a unity government.

U.N. Middle East peace envoy Robert Serry said the presence of a unified Palestinian delegation in Cairo for mediation talks was an encouraging development toward the Western-backed Palestinian Authority assuming its responsibilities in Gaza.

“It would be cynical and irresponsible if, yet again, the outcome of the talks would lead us to the previous status quo,” Serry told the General Assembly via video link from Egypt.

Gaza officials say the war has killed 1,867 Palestinians, most of them civilians. Israel says 64 of its soldiers and three civilians have been killed since fighting began on July 8, after a surge in Palestinian rocket launches.

“The massive death and destruction in Gaza have shocked and shamed the world,” Ban said. “The senseless cycle of suffering in Gaza and the West Bank, as well as in Israel, must end.”

Pierre Krähenbühl, head of the U.N. Relief and Works Agency (UNRWA), told the U.N. General Assembly that United Nations flags across the Palestinian territories were flying at half-mast on Wednesday in memory of 11 U.N. staff killed in the conflict.

He said 90 U.N. buildings had been damaged and that there had been attacks on six U.N. schools that killed dozens of Palestinian civilians who had sought shelter.

Ban called for swift investigation of the attacks on U.N. premises and other suspected breaches of international law.

“U.N. shelters must be safe zones, not combat zones. Those who violate this sacred trust must be subject to accountability and justice,” he said. “Mere suspicion of militant activity does not justify jeopardizing the lives and safety of many thousands of innocent civilians.”