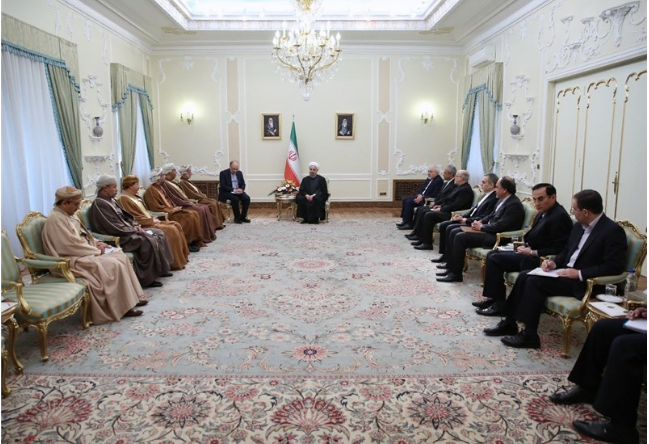 The declaration comes in stark contrast to Iran’s relations with Saudi Arabia, which closed all diplomatic and commercial ties with the country earlier this year following an attack on its Tehran embassy.

“The relations between Iran and Oman, which are based upon friendship, fraternity and mutual trust, are exemplary, and Tehran welcomes the expansion of economic cooperation with Muscat,” Rouhani said at the meeting with Yusuf bin Alawi bin Abdullah in Tehran,” according to the Tasnim News Agency.

He said the private sectors of both countries could cooperate in the development of ports, civil aviation, railroad transportation and banking activities.

Rouhani added that Iran was ready to facilitate the activity of Omani investors and merchants and called on Muscat to do the same for its traders.

On Saturday, the foreign minister also said agreements had been reached for “construction of a gas pipeline, cooperation in the field of aviation, trade, visa facilitation for businessmen and investors, laying the grounds for the presence of investors and holding of a joint venture of Iran and Oman”, according to daily the Oman Observer.

A planned pipeline between Oman and Iran with the capacity to carry 1 billion cubic feet of gas per day will be fast tracked and become operational by 2019, according to reports in January.

The two countries signed an agreement in 2013 for gas supplies to Oman valued at $60bn over 25 years.

Omani ruler Sultan Qaboos played an important role in facilitating the early stages of nuclear talks between Iran and world powers, which led to the removal of nuclear-related sanctions against the country in January.