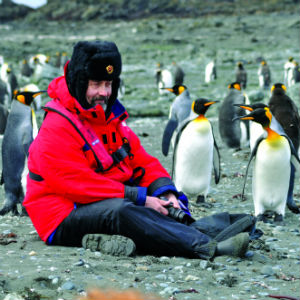 Even today it takes about a week to get from the south of New Zealand to Antarctica and that’s assuming you don’t hit storms or pack ice.

Our voyage was slower as we dropped anchor at islands teeming with seals and penguins, and took time out to look at B9B, the remains of the second largest iceberg ever recorded. But eventually we arrived; and one morning I woke up on the far side of the world to see a long cliff of blue and white glacier ice seemingly crashing down into the polar sea.

I’d never seen so much ice. Hundreds of feet high, the massive glacier appeared to be collapsing in front of my eyes but photographs I had been shown proved that it has just been hanging there, impossibly, for almost 100 years.

We all know about Amundsen and Scott racing to the Pole in 1911, but this cautious Australian scientist is the real hero of Antarctica. Rather than risk his men’s lives in search of glory Mawson explored Antarctica for over two years.

It was to his hut, now in the process of being restored, that we were heading.

Soon inflatable “Zodiacs” were buzzing us in to the natural harbour that Sir Doug discovered when he landed on Antarctica. I had seen pictures of it and recognised the low wooden structure immediately. It sits on a low plateau of rock that Mawson and his team had blasted when they arrived.

What I had not expected to see were all the Adelie penguins who now reside around it. These sweet little 18-inch men in their black tailcoats and pink scrawny feet scurry on the ice as if they are couriers intent on delivering important messages. I sat down to watch them and soon realised they have virtually no fear of us. Today Cape Denison is occupied by a few scientists who live in another bay and by archeologists who work here in the summer months. No wonder the Adelies haven’t learned to be suspicious of humans.

The other creatures at Cape Denison who have no fear are the Weddell seals, large brown podgy creatures, six-feet long who lie on the ice sunning their bodies all day. They have remarkable cat-like faces and smile up at you with huge black eyes as if to say “You wouldn’t hurt someone as cute as me, would you?” Fortunately, today, the answer is no. In Antarctica animals have priority, for this is a continent without people. Douglas Mawson’s hut is one of the very few buildings in a landscape that was never intended for us.

The hut itself was invaded by snow after Mawson’s departure. Denison is one of the windiest places on earth and over the decades small cracks between the hut’s planking allowed blizzard snow in. When archeologists arrived here in the 1990s they found snow had completely filled the hut and turned to ice.

The building was excavated from within using chain saws, trowels and finally hair driers. What was discovered when all the ice was out was a time capsule of how Mawson’s scientists lived and worked up until their departure in 1914. Shelves were stacked with books and magazines, tins of food stood where they’d been left, there were still chemicals in the dark room and a bottle of Imperial Russian stout stood where it was placed after drinking the health of King George V.

While Captain Scott’s hut has been turned into a museum, and Roald Amundsen’s camp sank into the Southern Ocean decades ago, Douglas Mawson’s hut is a unique record of how the first Antarctic explorers lived a century ago. It’s estimated that fewer humans have entered Mawson’s hut than have stood on top of Mt. Everest. It was something very special to be standing here, imagining the two years of isolation of those brave first explorers.