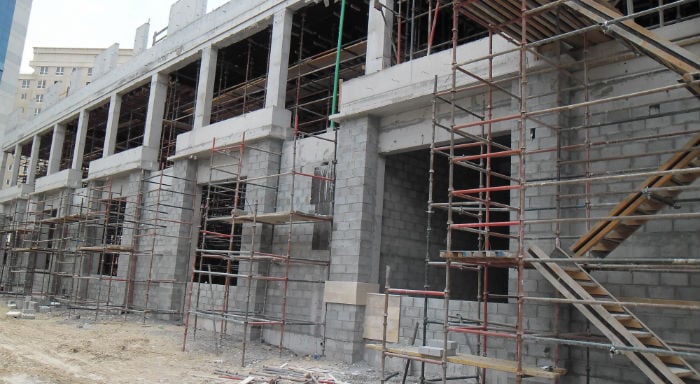 Construction on Khalifa Al Tajer Mosque, set to become Dubai’s largest mosque, is 25 per cent complete with concrete pouring for the main ceiling, pier and beam foundations set in place.

Billed as the Middle East’s first eco-friendly mosque, it is being constructed by the UAE’s Awqaf and Minors Affairs Foundation (AMAF).

Concrete pouring for the mosque’s minarets up to a height of 23 metres, and a concrete slab in the ablution block have also been completed, AMAF said in a statement. The electrical transformer room is also ready and is set for delivery to Dubai Electricity and Water Authority.

The bricks for the outer walls of the mosque are 40 per cent complete, while the internal plaster in the Imam’s accommodation block is under progress, it added.

The mosque, spread across 105,000 square feet in Deira, is slated for completion by March 2014, and is expected to accommodate more than 3,500 worshippers when ready.

While the mosque itself will occupy 45,000 square feet, the remaining area has been allocated for landscaping. It will feature green technologies such as solar panels, a roof garden for heat insulation and techniques for recycling worshippers’ ablution water for irrigation and washroom supply.

Tayeb Al Rais, secretary general of AMAF, said: “Following the successful completion of this …initiative, AMAF aims to integrate green building standards into a large number of mosques in Dubai to make them eco-friendly.”

The UAE has one of the highest water consumption rates in the world, with per capita water usage reported to be 550 litres per person per day, compared to a global average of 250 litres per head.