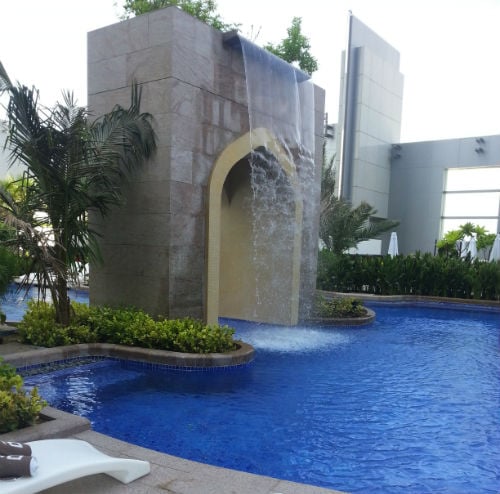 The first Conrad Hotel in the GCC, and second in the Middle East after Cairo, officially opened its doors in central Dubai today.

Directly opposite The Dubai Convention & Exhibition Centre, the 555-room hotel will primarily target business guests, directly alongside The Fairmont Dubai, although the chic poolside and strong food and beverage concepts will also draw in upscale leisure guests.

General Manager Mario Ferraro said the hotel’s five-year development had been “a long and complex story” involving 2,500 workers, 300 engineers and four interior design companies, but said it was a “great addition to the Conrad brand”.

The hotel is part of a 55 storey building with offices on levels 8 to 23; a spacious panoramic executive lounge is on the 24th and rooms rise above to the 46th.

Among the most impressive corporate facilities are two ballrooms on separate levels, each with abundant pre-function space, and complemented by 11 meeting rooms.

But the leisure touches are no less striking, with the eye-catching, leafy Purobeach urban oasis poolside on the same level as an attractively designed spa.

The Marco Pierre White Grill is another design dotted space with separate private dining area and large open kitchen, while next door is Cave, which lives up to its name with a plethora of hidden spaces and labels from the old and new worlds. The Sicilian Ballaro features a large terrace which adjoins Purobeach.

The Conrad Conciege App allows guests to personalise their stays, right from the moment they land when they can choose whether to be picked up in a Porsche or Maserati.