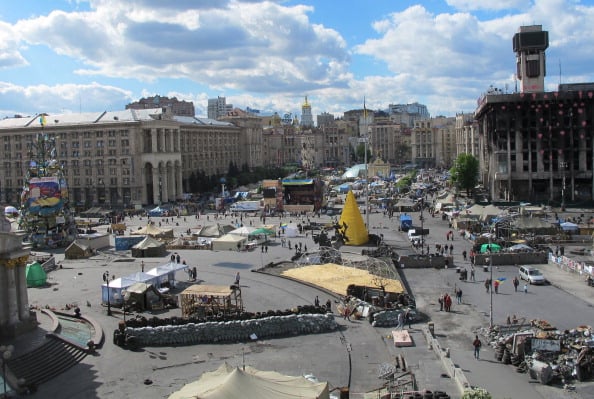 Companies reporting results in recent weeks have been casting an increasingly nervous eye over the situation in Ukraine and the impact of a possible broadening of U.S. sanctions against Russia and Moscow’s threat of responding in kind.

Several firms are feeling the effects of the economic fallout and amending forward results guidance as a result.

* Italian tyre maker Pirelli said it will hit its full-year targets, despite a weaker than expected outlook for the Russian market. “We expect a better environment in Europe to compensate for a slightly worse outlook in Russia and Latin America,” CEO Marco Tronchetti Provera said after the company reported first-quarter results.

* Danish brewer Carlsberg, the world’s fourth-largest brewer, lowered its forecast for Russia’s beer market and warned a weak rouble would hit its earnings in 2014.

* French bank Societe Generale cited the economic uncertainty caused by Russia’s soured relations with Ukraine as it announced a 525 million euro ($731 million) writedown on the acquisition value of its Russian arm, Rosbank. The bank said it expects to achieve a double-digit percentage return on equity in Russia in 2016, effectively scrapping a previous target of more than 15 per cent in 2015.

* Norwegian telecoms company Telenor fell out of favour in recent months, partly because of its exposure to Russia and Ukraine. Its CEO said on Wednesday it would stick with an investment in Russia-focused Vimpelcom, in which it holds a 43 per cent stake, even though its view of Russia had changed because of the events in Ukraine.

* Drugmaker Richter cut its 2014 operating profit guidance because of the turmoil in Ukraine and Russia, two of its biggest markets. “Patients have less money, the business of pharmacies has become more uncertain, everybody is reducing stockpiles and everyone is trying to brace for survival,” CEO Erik Bogsch said after the Hungarian company reported a 51 per cent fall in first-quarter net profit.

* E.ON remains committed to business in Russia, Germany’s largest utility said as it reiterated guidance for 2014 EBITDA of 8-8.6 billion euros and underlying net income of 1.5-1.9 billion euros. “In the long-term, we view the Russian power market as stable and expect a significant need to renew capacity as well as further investment opportunities,” chief executive Johannes Teyssen said.

* Austria’s Erste Group Bank stuck to a forecast of flat operating profit this year, saying the Ukraine crisis could still derail an improving economic outlook in its main central and eastern European markets.

*Visa, the world’s largest credit and debit card company, said the U.S. sanctions were hurting card transaction volumes and revenue growth would slow further this quarter. “We are caught between the politics of the United States and the politics of Russia,” CFO Byron Pollitt said.

Visa and rival MasterCard, which both stopped providing services to two Russian banks when sanctions were imposed in March, also face the threat raised by Russian President Vladimir Putin of the country developing its own credit card system.

* Nokian Tyres, which makes about a third of its sales in Russia and runs a large factory there, cut its full-year profit guidance after the weak rouble reduced its euro-denominated sales in the country.