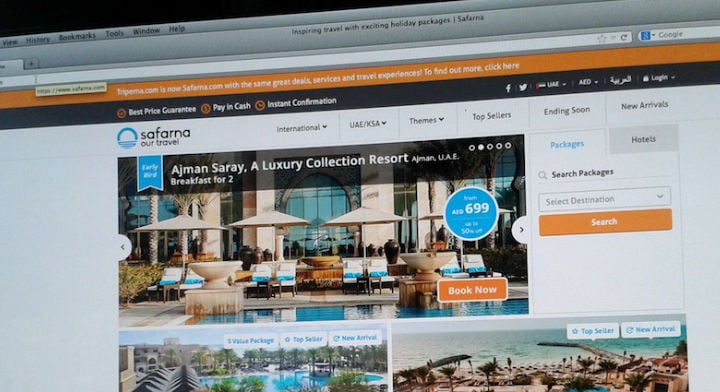 The new name means ‘our travel’ in Arabic, and the rebranding became operational from October 12, the company said.

“We wanted a name that resonated more with the Arab consumer and that was the reason for the change,” Kenny told Gulf Business.

Safarna, which was announced in November 2013 and launched less than a year ago, is currently focusing on the UAE and Saudi markets.

“It’s been exciting and challenging so far. We are going against very established companies in the Middle East, but we see that consumers shop around a lot for travel and they are very interested in finding good deals, particularly for local stays in the UAE but also regionally,” explained Kenny.

The company is targeting specific destinations that people in the Middle East frequently travel to, and also narrowing in on the ‘staycation’ trend in the UAE, he said.

In the northern emirates, Safarna is now the largest online seller of hotel rooms, Kenny added.

Going ahead, the company’s main focus will be on mobile.

“On Safarna, 70 per cent of our traffic and 40 per cent of our revenues currently come from mobile. Our goal is to be the largest mobile travel agency in the Middle East. And that’s what we are working towards,” he said.

“We’ve been kind of under-cover for 12 months, building the platform and the technology. But a lot more people will know us in the next 12 months,” Kenny added without disclosing any further plans.

The regional travel industry is booming, with the overall online travel ticketing market in the Arab world estimated at $50 billion for 2014, according to Payfort.

A recent report by travel technology firm Amadeus stated that the growth in GCC’s travel industry will be driven by young tech-savvy users who demand round the clock high-speed connectivity.

According to the study, these users will turn to mobile internet for travel solutions and will plan, book and manage their options within the cyberspace.