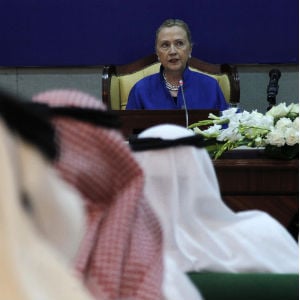 US Secretary of State Hillary Clinton on Saturday raised concerns over a move by the UAE to shut down a US-funded pro-democracy group.

“We very much regret it,” Clinton said after a meeting in Riyadh with foreign ministers from Gulf States, referring to the closure of the Dubai office of the National Democratic Institute (NDI), which was also the subject of a crackdown in Egypt.

“We are as you know, as anyone who has visited the United States, strong believers in a vibrant civil society … I expect our discussions on this issue to continue,” Clinton told reporters.

NDI and the International Republican Institute, US-funded groups loosely affiliated with the two main political parties in the United States, are among a number of foreign and domestic civil society groups that have been prosecuted in Egypt.

In Egypt, the authorities accused campaigners for the non-governmental organisations, including the son of US Transportation Secretary Ray LaHood, of working for groups receiving illegal foreign funding and had prevented them from leaving Egypt.

The United States warned Egypt the case could imperil $1.3 billion in military aid to Egypt, but tensions abated this month when Egyptian authorities lifted a travel ban on some of the foreigners targeted and most of them left the country.