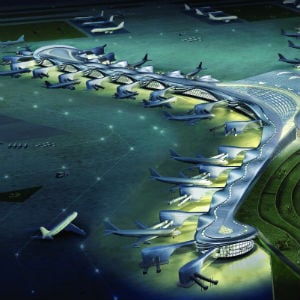 With airlines and governments likely to spend around $300 billion on new airplanes and airport expansions in the next decade, manufacturers are flocking to the region to avail themselves of the opportunity.

The breakneck pace of aviation expansion in the GCC has also given the international airline community pause for thought. The success of the three main flag carriers, Emirates, Etihad and Qatar Airways often gave rise to the presumption that the three would have to merge at some stage given the unsustainability of business models as independent entities. Now the doubters are having second thoughts, as it becomes clear that the three can survive – and more – on their own.

The situation across the region’s airport network is far from homogenous. The airports associated with the “Big Three” have all experienced strong double-digit growth in recent years, and are the main contributors to the 11.4 per cent headline CAGR by the region’s top ten airports by passenger throughput since 2005.

Others, particularly in Saudi Arabia, have come up against capacity limitations, fluctuations in growth, and an acute need to improve infrastructure. Of the region’s top ten airports, three are in the UAE, four are in Saudi Arabia, and Qatar, Kuwait and Oman have one each.

“The GCC has 37 civilian airports, although only about 13 of them are international airports while the others are domestic,” says Raghu Mandagolathur, senior vice president for research, Kuwait Financial Centre.

The debate about passenger capacity gives rise to questions about the second part of the expansion equation: the rate of regional airline development.

Ongoing airport expansion across the GCC needs to be sufficient to meet the requirements of the carriers as a whole. The 27-member Arab Air Carriers Organisation said in February, that the size of its members’ fleet had increased from 602 aircraft in 2007 to 856 last year. According to IATA information sourced via Dubai Airports, the Middle East has invested over $200 billion in more than 1,000 aircraft since 2005, and plans to spend a further $200 billion in the next decade.

Current rates of passenger and fleet expansion raise questions about whether Gulf airlines are buying planes quickly enough. It’s clear that rates of expansion mean that significant infrastructure upgrades will be required at regional airports, despite the duplication of effort that is often seen in the region. Analysts believe significant amounts of cash have been earmarked to cope with increased demand on the ground.

“Based on our outlook for the sector, government spending and economic growth in general, we expect an investment of over $100 billion to be made on the [infrastructure] sector through 2015,” says Mandagolathur.

“We have identified 15 projects across the GCC for airports which are being expanded, upgraded or built from scratch. Seven of these are in UAE (including Al Maktoum International), one for Qatar, Kuwait and Bahrain each, two in Oman and three in Saudi Arabia.”

Saudi Arabia boasts a total of 30 airports. Many of these have great potential, especially in terms of low- cost travel and even Hajj pilgrimage.

To date, National Air Services and Sama Air’s attempts to set up rivals to the incumbent Saudi Arabian Airlines have met with failure and hundreds of millions of dollars in losses, partly due to bad management and partly due to Saudia’s subsidised fuel and other perks.

Data provided by Markaz indicates that the six biggest projects alone will cost almost $86 billion, with over half earmarked for Al Maktoum International Airport, also known as Dubai World Central, in Jebel Ali. It is clear that the new airport’s development has been held back by the financial crisis, with the timing of project roll-out unfortunate. Its virtue is that it can quickly respond to demand increases as and when they happen.

Despite the huge sums being spent in the region on planes and airports, it is clear that in somecases this will not be enough. Saudi Arabia in particular is undergoing an acute crisis, partly because of its monolithic bureaucracy, and also due to the fact that the Defence Ministry only relinquished control of civil aviation in November 2011 on the death of defence minister Crown Prince Sultan, the father of Saudi aviation.

“All GCC airports are over capacity, [but] Saudi Arabia as a whole is moving 43 million passengers a year through airports with a total capacity of 32 million, indicating a utilisation ratio of 135 per cent,” says Mandagolathur.

“Even with the planned expansion of its airports, capacity would be increased to around 50 million passengers a year, which (based on expected passenger growth) would still give the country a utilisation ratio of 105 per cent.

“The government seems keen to move along with its expansion plans, regardless of market conditions and the state of the global economy; moreover, it has ample reserves with which it might finance such large-scale projects and we would expect the new capacity to come online as scheduled,” he says.

DUBAI WORLD CENTRAL: WHAT LIES AHEAD

The delay in development of Dubai World Central has been caused by the financial crisis, and continued large-scale upgrades there will be dependent on sufficient revenue generation at DIA to cover costs. In the meantime, analysts believe that DWC will focus on cargo while low passenger levels persist. Question marks hang over a possible move to DWC by Flydubai in 2013 due to potential loss of connectivity with Emirates.

“It’s my understanding that Al Maktoum Airport will be more of a cargo and logistics facility rather than the more passenger-oriented DIA. The airport is expected to complement Dubai with passenger capacity of five million a year versus the 90 million passenger capacity that DIA is aiming for,” he says.

“Subsequent expansions can always be undertaken at Maktoum in order to boost passenger capacity at a later time.

“It is premature to speculate on DWC and how effective or successful it will be. Given the financial issues in the emirate, there might be quite a delay in this regard, [but] Al Maktoum Airport will certainly aid in lowering capacity constraints at DXB, both on the passenger and cargo side.”

According to IATA, more than $100 billion has been spent on airport projects, including $6.8 billion in Abu Dhabi, and $14 billion on New Doha international Airport. “The only comparable region to the Middle East in aviation investment is Asia-Pacific, which is a much larger market,” says IATA.

If another $100 billion is spent in the next decade, it will at least be a sign that the region’s planners are trying to measure up to the huge expectations being placed on them.