A cityscape in flux: The outlook for the UAE property market - Gulf Business 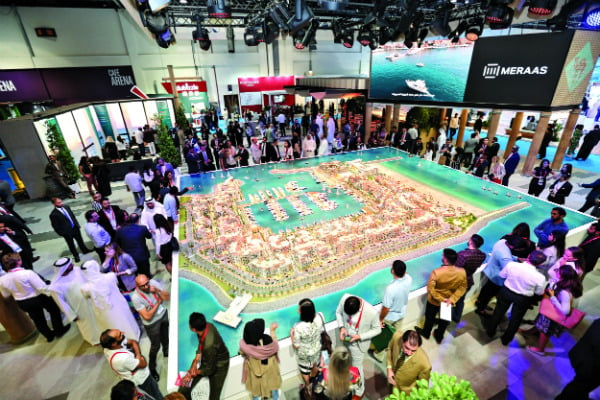 As usual, the market was watching as this year’s Cityscape Global trade show approached in early October.

But with price declines noted across the UAE in the build-up it was more a case of seeing if the show floor would match current market conditions or indicate a more prosperous year to come for the industry.

One observer taking the pulse of Cityscape on day one was Asteco managing director John Stevens, who said it was the first time since 2010 that the property management firm had opted not to have a stand.

“We’ve been telling our clients it’s not necessarily the right time to launch because it’s going to be hard to get your message out there and to be picked up amongst all of the other noise,” he explained.

“The days of holding your project to launch at Cityscape for a big feeding frenzy of sales I think have passed.”

Asteco released a UAE-wide report a week before the show indicating that sales prices and rents had declined in every emirate during the third quarter.

Dubai villa and apartment rents were down 3 per cent and 2 per cent respectively in the three months from the end of June, while sales prices were down 5 per cent, according to the firm.

However, despite the damp conditions, there was plenty of optimism about the prospects of the event.

“The Cityscape response should not be viewed from the perspective of sales alone,” said Sun and Sand Developers managing director Sailesh Israni, whose company launched the third phase of its SunCity homes project in Dubai International City at the show.

“The world has moved on from one-way marketing promotions. Today we are in a digital age of transparency. Buyers are well researched and in no hurry to buy. They take their time, weigh up all the options.”

Gemini Property Developers CEO Sunil P Gomes, fresh from a walk around the show floor, also indicated the atmosphere was far from one of doom and gloom.

“The mood of Cityscape is quite positive generally speaking,” he said.

“Some of the major master developers have launched a couple of very interesting, well-designed projects so I think that’s very good.”

Even with the absence of Dubai’s lead developer Emaar for a second year running, there was far from a shortage of big project launches around this year’s Cityscape.

The company said its Sahel Al Emarat riviera was designed as a second-home destination. It will span 370 hectares and 3.4km of beachfront spread across three districts.

Meanwhile, Dubai developer Meydan used the first day of the show to launch of a new waterfront community in Jebel Ali.

Marsa Meydan is intended to mimic Newport Beach in Los Angeles with a mixture of residential and lifestyle space. Among the key features is a climate-controlled marina featuring a circular shade for the hot summer months.

Across the border in Sharjah, developer Arada used the opportunity to unveil the Central Hub district of its $6.8bn Aljada master plan. The company said it sold 652 homes worth Dhs545m ($148.3m) at the show and revealed plans to launch a 500,000sqm dual-licence business hub in the first quarter of next year.

“On paper it is a huge project but if you look at the emirate of Sharjah there is a huge need for a tight community; a development that changes the look and feel of the emirate. Singlehandedly Aljada does that,” said Arada vice chairman Prince Khaled bin Alwaleed bin Talal.

“For now you don’t even have a business park in Sharjah so we are creating one. When you compare it with real estate prices to Dubai, we think many companies will step away from Dubai and come to Sharjah and have their HQ there instead.”

These and other projects including government developer Dubai Holding’s Madinat Jumeirah Living, a 3.85 million sqft freehold residential community near the Burj Al Arab, gave some reason for optimism.

While special offers and payment plans also gave some indication of the current buyers’ market described  by commentators.

“Developers are having to adapt to market changes and price units in the correct way to make sure they are getting interest,” said listings site dubizzle’s head of sales for property Matthew Gregory.

“Interest at the moment is much more around investors that might be buying a single unit as opposed to what happened in the past where some were buying whole buildings.”

And there were plenty of examples of competitive deals on the show floor as developers competed for customers.

“At the moment the market is soft, cost of sale and cost of acquisition has gone up for all developers, but it’s all the behavioural patterns of a mature real estate market,” suggested Niall McLoughlin, senior vice president of marketing and corporate communications at luxury developer Damac, whose company was offering units for as little as Dhs399,000 ($108,622) at the event.

Another familiar name in the Dubai real estate scene, Danube Properties, opted not to launch any new projects at the show but increased the size of its stand, according to director and partner Atif Rahman.

“This year we quadrupled our presence in Cityscape. So that’s evidence that we believe in this event and we are very confidant that momentum would be created for the peak period [of the year] that we’re entering,” he said.

The company unveiled eight-year payment plans for some of its units and said it would continue to stick to the affordable end of the market.

“We want very categorically to stick within the segment because we believe this is the way to go forward. It is a volume market, it holds the real end users and real investors, so real customers.”

Others though were less impressed by the increasingly attractive plans on offer.

“It’s about competing on a price point and a product that the client wants, as opposed to trying to sell something based on some obscure financial model,” said Gemini’s Gomes.

“[Generous payment plans] are great for buyers, but as a developer it’s not so good as you’re now getting your profit in year six and year eight.” 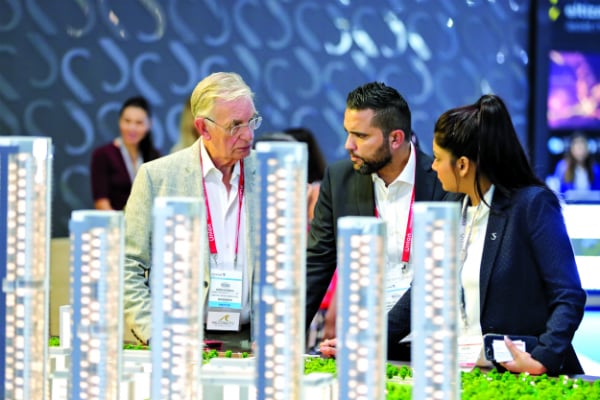 Outside of the mood of the show itself, another key talking point at Cityscape this year was undoubtedly UAE government changes to visa policy announced over the last six months.

Of these, plans to introduce a 10-year residency visa for investors and talented individuals and a five-year retirement visa have undoubtedly captured the market’s interest.

“I think it’s a step in the right direction – the realisation of the fact that people who have spent a considerable amount of time will be more inclined to stay back,” said Nakheel CEO Sanjay Manchanda of the retirement visa.

“Take my example – I have been in the region for 30 years and if I get a chance to stay here, I will. It’s a fantastic place to be. So I think that will only prompt more interest in the real estate market.”

Another potential boost being eyed by developers was the easing of mortgage rules in a market that is moving away from cash buyers.

Reuters reported in September that the UAE Banks Federation was mulling a proposal to the government asking for it to raise the borrowing limit for first-time buyers of property worth up to Dhs5m ($1.36m) from 80 per cent to 85 per cent for citizens and 75 per cent to 80 per cent for foreigners.

Developers at the show appeared overwhelmingly in support of the potential move but gave differing opinions as to what they wanted to see in terms of regulation.

“There should always be a percentage of loan-to-value (LTV) but it also depends on the product itself. If you’re looking at a very high-end property maybe the percentage should be lower,” said Damac’s McLoughlin. “[For] International loans its 10-15 per cent, I think a 10 per cent LTV.”

Danube’s Rahman argued the easing of restrictions on mortgages for off-plan property could also help the market.

“If the central bank regulation for mortgages is liberalised a bit more towards off-plan property, where you’re not required to put down 50 per cent before the bank can fund 50 per cent, that can make a huge impact in the market.”

But Asteco’s Stevens suggested current market conditions, which have seen sales prices of villas and apartments drop by 10 per cent or more over the last year, might mean it is the wrong time to loosen restrictions even if it would provide stimulus.

“If you increased the loan-to-value or deposit to a 90 per cent loan you’ve got someone in negative equity already [based on this year’s market performance] so it’s probably the wrong time to think about that.”

Cutting agents out of the picture?

Another key talking point, particularly for real estate agents, was a Dubai Land Department blockchain initiative announced in May to allow landlords to sell and manage their properties online.

The Real Estate Self Transaction (REST) portal, due to be implemented by the first quarter of 2020, will also allow landlords to rent their properties and pay for electricity, water and internet bills remotely, avoiding the need for property management and service agents.

Dubizzle’s Gregory said the platform may not all be bad news for brokers, as it would allow transactions to be conducted in a more fluid manner.

“I don’t think it’s ever going to cut out the requirement for agents. Having spoken to a few of our key clients they feel there is an opportunity here to make things faster,” he said.

“From an agent’s perspective they are there to provide a service, that service can’t be done online.”

This sentiment was echoed by developers, which appeared in favour of any step to speed up property transactions and improve transparency. But there were also some concerns.

Danube founder and chairman Rizwan Sajan said he wasn’t in favour of any move to cut out agents.

“I think everybody should get their share, cutting out the agent is not a good deal and I don’t think it’s going to work in the market,” he argued.

“[Roughly] 50 per cent of my sales come from the agents so I’ll always depend on the them and I’m very happy agents have confidence in us.”

As we head towards the end of the year, the outlook for the UAE real estate market is mixed.

Asteco’s Stevens said the firm expected pressure to continue on rents and sales price in Dubai into early next year, which will have a knock-on effect on the Northern Emirates. But there may be some let-up as Expo 2020 approaches.

“I think [Expo] will increase levels of demand but we still have a lot of supply that’s coming that needs to be absorbed,” he said.

Among developers, meanwhile, there was some hope that current market conditions represented the nadir of the cycle.

“We think we’re at the bottom now,” said Damac’s McLoughlin. “Again it will behave like a mature market, the right product in the right location will start having price appreciation, but it’s not going to be double-digit growth in one-to-three years.”

Nakheel’s Manchanda suggested conditions would remain “an interplay of demand and supply,” adding: “I would not say this is the reality for times to come.”

“Our forecast is that for next 12 months we will be able to sell 2,000 apartments based on our data and research – we are confident about achieving that target,” said CEO Ahmed Alkhoshaibi.

“The Sharjah market is resilient – even during the real estate crisis the drop in prices was fractional. Investors know Sharjah currently is one the highest rental yields markets – even more than Dubai.”

No doubt developers across the region will be aiming to echo this confidence as we head into 2019.