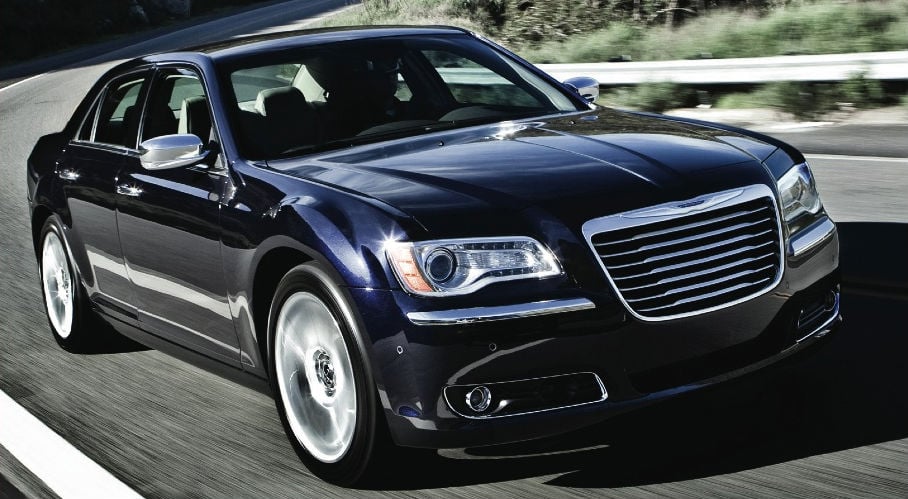 The talk around town this month is all about a movie. But it should be about a car. This car. Not just because it’s brilliant, but because it’s the car favoured by the superhero in said Hollywood blockbuster The Dark Knight Rises. James Bond may have held the cool-car-collection title for the last 60 years but 007 should be ready to stand aside. Enter Batman, the Dark Knight, and his Chrysler 300C.

Fair enough the 300C I’m driving is not the modified version Chrysler fitted with a jet-powered engine and rockets behind the grill, but it is the new Executive model and it still has the 5.7-litre HEMI V8 engine, more than enough for most spandex-clad superheroes.

The Executive class is the latest version of the 300C to hit the UAE roads and it stands out from its predecessors. A newly released platinum-chrome mesh grill matches the platinum-chrome door handles and wing mirrors; the shiny-silver look adding a dollop of class and elegance to an already visually dominant car.

Designed to be Chrysler’s most luxurious sedan ever, the 300C is as comfortable as it gets inside. The seats are wrapped in Nappa leather – the one I’m driving is mochachino coloured – with leather instrument panels and arm rests to match. The front seats have a huge 12 options for movement – the four-way lumbar support is the real novelty and a gift on long journeys.

Despite its colossal size – the car measures 199 inches front to back and 75 inches wide – the 300C is no slouch. The 5.7 litre V8 produces 363 horsepower while maintaining its fuel saver technology. Paired with a five-speed automatic transmission with incredibly smooth gear changes, it’s one of those cars where you reach 100kmh without trying – and even then you don’t quite believe the speedo. Given its size and weight it’s not surprising that the 300C under-steers slightly, though its only really noticeable at speed.

The car purred along nicely but left me wondering if all 363 horses really existed. But flirt the rev counter above 4000RPM and the engine comes alive; a warning
growl followed by a sustained roar that really does sound more like Batman’s signature vehicle than an executive sedan. There is a slight turbo-lag effect when you put your foot flat down, but the oncoming power makes up for any lost ground.

The 300C’s Uconnect Touch system has been upgraded for 2012 with voice control commands for the Garmin navigation and one of the largest touchscreens on the market at 8.4-inches with a good, responsive screen.

New iPod controls are included as well as the option to connect your phone through Bluetooth with voice activation making phone dialing completely hands free.

Some of the advanced safety features are so good it’s hard not to feel invincible in the Chrysler. The very clever wing mirror LEDs flash orange when a vehicle is in your blind spot, followed by an audible warning should you indicate and turn towards the other driver. The wing mirrors also tilt down when you select reverse gear, which is a nice touch.

Bruce Wayne’s 300C then is a dangerous rival to James Bond’s back catalogue of Aston Martins and Jaguars – it may be missing a machine gun but it’s advanced
safety and connectivity technologies are right up there. Oh, and it also has a remote start option straight out of Tomorrow Never Dies. It really is Batman meets Bond.