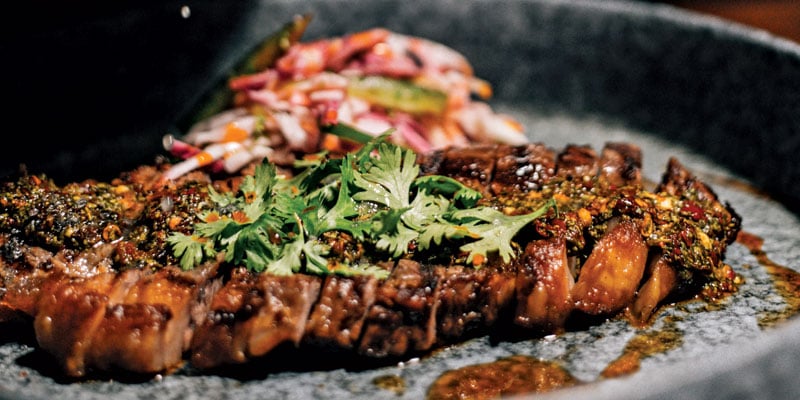 It’s reasonable to assume that Dubai has experienced a recent wave of Mexican restaurants making their presence felt in the emirate.

Puerto 99 at Bluewaters offers a live mariachi band, while Meshico which is located at The Pointe on Palm Jumeirah opened to strong reviews earlier this year and Tulum in Dubai Mall’s Fashion Avenue has a cuisine that focuses on the southwestern region of Mexico.

Safe to say, any Mexican outpost now opening in Dubai has a sheer number of restaurants that it will have to outsmart in order to become the go-to restaurant for Mexican cuisine – something that Chingón which recently opened at the Grand Millennium Hotel Business Bay manages to do quite effortlessly.

The vibe of this restaurant, like the food, is unpretentious. Large windows open out onto views of the Dubai Canal and Downtown Dubai, while there’s a separate lounge area and a private dining space too. The guacamole that we begin with gets us off to a good start. It isn’t pasty or heavy on the palate, and doesn’t leave a residue on our palates.

Next, the fried Chingón fuego prawns are another on-point offering that is served along with an ash mayo green sauce. We follow that with the scallop tostadas that have a cashew salsa macha base and blood orange caviar in a well-plated preparation which shows that chef René is not taking any shortcuts.

There is a strong Italian community in Mexico, and that would explain the inclusion of the next dish on the menu: chimichurri burrata. It is served here, cleverly, on a base of charred polenta and topped with pickled tomatoes. Visiting a Mexican restaurant and not eating tacos is a wasted opportunity and so we opted for the chicken pastor tacos – with pineapple salsa and white onion, which in its original version, is the Mexican take on the shawarma brought by the Syrian and Lebanese immigrants to Mexico at the dawn of the 20th century.

Each of the mains are portions large enough for two. The Mexszechuan chicken is chef Millán’s version of combining influences from his native Mexico and Hong Kong, where he worked earlier, by combining a chicken marinated in Mexican spices and arbol chillis that fire up the dish. As expected, there’s an abundance of chillis used across the menu – we’re told that there are 37 different types of chillis that the restaurant sources from Mexico.

The other main course that we tried, the Ajillo tiger prawns, use yet another variety of chilli – guajillo chilli – served with creamy uni yuzu espuma sea urchin. To end our meal, we opted for the manchego cheesecake which highlighted the inescapable Spanish influences on Mexican cuisine and comprised of Spanish semi-cured cheese, lemon curd and mandarin sorbet.

Chingón found a good rhythm in terms of its food, vibe and overall positioning. If it stays the course, it needn’t worry much about the competition.