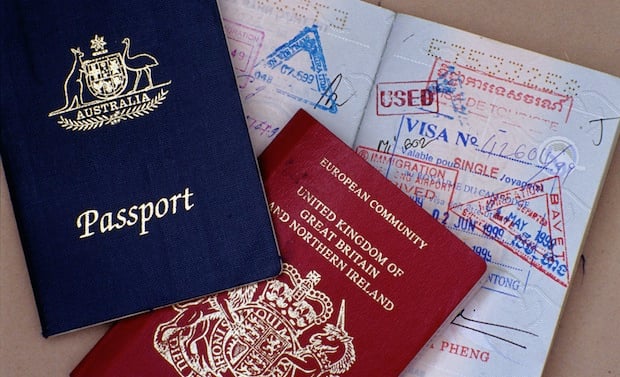 As anyone who has ever travelled will be aware, not all passports are the same when it comes to the ease with which you can make your way around the globe. For those who are citizens of nations with so-called ‘strong’ passports, getting through border control in most countries requires little more than the flash of a travel document – or at worst the payment of a visa-on-arrival fee.

For others meanwhile, such freedoms are granted only in a handful of countries.

So what dictates the strength of a passport?

Why, for example, can German citizens travel with ease through perhaps 80 per cent of the world without a visa (or by obtaining a visa-on-arrival) while other nationals can only do the same for 20 or 30 countries?

The answer has little to do with the passport holders themselves, and much to do with the economic and political standing of their country of origin – matters entirely out of the control of the average traveller.

This used to be the end of the discussion. But not any more. We will address what can be done if you have a weak passport – but first let’s understand the overall visa-free and visa-on-arrival situation around the world.

Before we get into the different factors at play when it comes to how freely different passport holders can travel around the world, let’s first establish exactly what we mean by visa-free and visa-on-arrival travel.

Visa-free, as the name suggests, simply means passport holders are granted access to their destination country without having to apply for and present a visa upon entry. Meanwhile, visa-on-arrival requires travellers to present themselves to a visa or immigration desk on arrival in their destination country and apply and (if required) pay for a visa, which is then usually stamped or pasted into the passport on the spot. This process is normally a formality and nowhere near as arduous and time-consuming as the standard pre-travel visa application process.

But what exactly determines which passport holders are afforded these greater freedoms and which are not?

Much like in business, in the world of passports it’s not what you know, but who you know. Many countries around the world have treaties and agreements in place with each other that allow citizens of those countries to travel freely between signatories. The most obvious example of this is the EU which lets passport holders have visa-free travel between all 28 of its member states.

But that’s not all. By virtue of being an EU passport holder, citizens are also granted visa-free and visa-on-arrival travel to many more countries around the world. While worldwide entry requirements differ between each member state, all EU passports fall into the most highly ranked group. And it’s a position well worth being in because according to the UN World Tourism Organization (UNWTO), last year around 61 per cent of the world’s population had to get a visa before travelling internationally, 6 per cent could apply for an electronic visa (pre-travel approval completed online), and 15 per cent could apply for a visa-on-arrival. Only 18 per cent of the world’s population enjoyed visa-free travelling.

A strong EU passport of course extends outside of Europe as well. In return for allowing its citizens hassle-free entry, the EU grants reciprocity to a host of other countries such as Australia, Brazil, Malaysia and South Korea. This essentially means that citizens from those nations can also travel to (and within) the EU, thus extending the reach of many more of the world’s passports.

A great example of this type of agreement is the Commonwealth: Made up of 52 countries including the UK, Australia, New Zealand, Canada and many smaller nations such as Fiji, Dominica and Grenada, not only are passport holders of many Commonwealth countries afforded visa-free and visa-on-arrival travel between other member states, but by virtue of being a member they are granted easier access to many other countries as well. A prime example of this is a country like Antigua and Barbuda: A small island nation that thanks to its membership in the Commonwealth can offer its passport holders visa-free and visa-on-arrival access to over 130 countries worldwide.

If a country wishes to readily trade with others across the world, it must be willing to open its borders to foreign citizens. After all, it’s incredibly difficult to arrange meetings and broker deals if each visit requires a months-long visa application process.

A perfect example of this is the Schengen area in Europe: Comprising of 26 countries, Schengen allows for free movement, trade and travel across country borders for EU passport holders. A study published in The World Economy journal confirmed what has been clear since its introduction in 1995 – it has been a contributing factor behind the EU becoming the world’s largest economy.

On the flipside, a study published in the Applied Geography journal in 2011 examined the effect of visa restrictions on trade and found that ‘by raising the costs of travel and deterring some visitors, visa restrictions hamper personal contact across borders, which is detrimental to trade and foreign investment.’ The paper goes on to estimate that if just one of the trading partners imposes a visa restriction on citizens of the other nation (with no reciprocal restriction in place), bilateral trade can fall by almost 20 per cent.

Countries around the world are of course only too aware of this. Therefore to facilitate ease of trade, many offer visa-free and visa-on-arrival access to passport holders of many of the world’s economic and business powerhouses.

The exception to this rule is China which as a passport usually ranks quite low on any list but since the country itself continues to become an ever-more important trading partner to the West, we find many countries such as the UK, Argentina and US refining (or planning to refine) visa-entry restrictions for Chinese passport holders.

It is no coincidence that seven of the world’s top 10 economies – US, UK, Japan, Germany, France, Italy and Canada – all rank within the top 10 strongest passports, affording holders visa-free entry to over 170 other nations.

Essentially, many countries are willing to allow entry more readily to passport holders of economically strong nations as the logic follows – rightly or wrongly – that those travellers will contribute to and stimulate the economy in some way when they are in the country, be it through business or tourism.

A nation’s global economic standing also affords its passport holders greater visa-free access to the rest of the world, as citizens of those nations are considered less likely to breach travel conditions or not return freely to their country of origin.

This is where political stability comes in as well. Very few of the nations listed at the top of the passport power ranking lists have experienced any major civil or political unrest in recent memory. This is reflected in the number of countries that their citizens can travel to without requiring a visa – again, they are seen to be more likely to adhere to entry requirements and ultimately return home.

A look at the bottom of the list shows just how much of an impact instability at home can have on a citizen’s freedom to travel – with Afghanistan, Pakistan, Iraq, Somalia and Syria all having the most issues with visa-restricted travel.

Restricted by your passport?

So where does all of this leave those people who – through no fault of their own – are in possession of a passport from a nation with heavily restricted visa requirements? The frustration is doubled given that these limits are due to geopolitical factors well outside of the control of the individual passport holder.

Fortunately, there are options available. According to a 2015 report by the International Monetary Fund, the number of countries offering citizenship-by-investment programmes has recently surged – in fact, it’s now estimated that citizens worldwide are spending a collective $2bn on these schemes. In doing so, investors are able to open up greater opportunities to travel, trade and live in hundreds of countries around the world.

Janice Williamson is the managing director of NGE