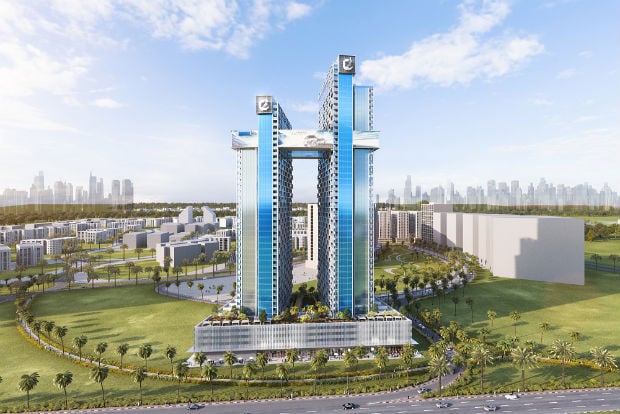 The company’s latest portfolio of projects includes residential properties and a commercial tower in Riyadh.

It has launched Samaya, a project spanning one million square metres and CMI, a luxurious commercial building in Riyadh.

Cayan Cantara will be completed by 2018, the developer added. It will comprise of retail shops, restaurants, a spa, a highest outdoor screen and a conference hall.

The company is also planning a “hanging glass-walled swimming pool”. But the developer did not specify any details about how it is planning to see it through.

Although the officials did not divulge any details about sales, Cayan Group Chairman and President Ahmed Al Hatti implied that the reception to a selected sales launch has been satisfactory.

“We invited our loyal investors a few days ago to review the project and the response was beyond our expectations,” said Al Hatti.

He did not mention the exact price but a company spokesperson later confirmed to the media that the developer is planning to charge Dhs1,200 per square metre for the Dubai project.

As per the agreement, Shuaa Capital will help the developer mobilise Dhs700-Dhs800 million for the project, Shuaa’s CEO Karim Schoeib said. The remaining amount will be raised through other means.

Dubai’s residential property market has softened in the first quarter of 2015, with sales prices and rents remaining largely flat, according to research from JLL.

Sales transactions have also fallen steadily year-to-year in the emirate but Schoeib warded off concerns saying that there was strong demand for mixed-use projects such as Cayan Cantara.

“We see substantial demand for projects such as these where there is residential and hospitality. There is also more demand for hotel apartments in Dubai due to high prices in hotels.”

The project is also being built to help the emirate tide the visitor boom during Expo 2020, he said.

Cayan is not the only developer who has launched a mixed-use project to target a wider segment of buyers.

Other notable mixed- use projects include La Mer, a mixed-use beachfront development in Jumeirah that is being developed by government owned Meraas, and Viceroy Dubai Palm Jumeirah by SKAI Holdings.

Despite an over supply of mixed-use projects in the market, Al Hatti is banking on the competitive pricing offered by Cayan Cantara.

“Through this project, we want to shake the market. Usually in the Dubai market, if there are high-end projects with high quality, that means high prices. In this project, clients can see high quality with very good prices.”