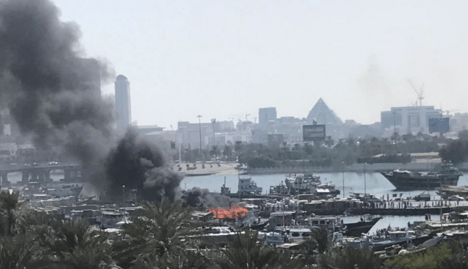 A wooden cargo boat sunk after catching fire in Dubai Creek this afternoon.

There were no reports of injuries at the incident, which occurred on the Deira side of the creek at the dhow wharf near Al Maktoum Bridge.

Dubai Civil Defence said the fire broke out at 1:13pm.

It was eventually brought under control at about 2pm after spreading to other cargo waiting at dock number 6.

Gulf news cited a dockworker as saying the vessel was an Iranian cargo boat due to leave with electronics, blankets, shoes and other items.

He said a relative of one of the crew members told him the engine of the craft had caught fire.

Traffic on Baniyad Street opposite the incident was congested but has now returned to normal.