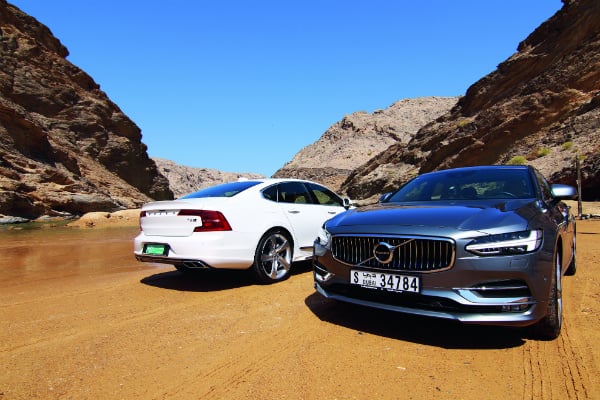 The mid-size, premium luxury sector is one of the most crowded in the market with many options from Germany, Japan, the UK and the US.

So when it’s time to upgrade, it’s often too easy to tick the same box and move on. However in this case, it’s worth stepping back and considering one more option from Sweden.

The Volvo S90 is quirky and different enough to warrant a closer look if you’re looking for something fresh and unique.

It’s styling is subtle yet very distinctive, being dominated by the ‘Thor’s Hammer’ signature in the headlights and the full width taillight treatment across the rear. The look polarises opinion and even after a few days with the car I still couldn’t convince myself to like the tail treatment, yet others loved it.

The clean-cut look extends to the interior, which is much lighter than most of its competitors thanks to the use of light and dark leather, matte finished, open-pore wood trim and polished aluminium.
This gives off a Scandinavian feel of understated efficiency mixed with natural veneers.

The dash layout is sparse with simple dials while other functions are locked away in the vertically stacked, 9-inch LCD infotainment display.

With a mix of scroll, swipe options both left and right, up and down, it took some navigating to find simple procedures such as air-conditioning. But while not being initially intuitive, I’m sure it will become second nature after a bit more familiarisation.

Adding to the quirkiness, the start procedure is neither with key, nor button but the twist of a centre-console mounted dial that sits above a knurled, barrel-shaped thumbwheel. The thumbwheel is used for selecting the various drive modes from Eco to Comfort and Dynamic which alters not only the gear shift patterns but also the steering feel and damper settings.

There’s 316bhp of grunt and 400Nm of torque under the right foot meaning for a largish car, it is quite nimble. But if it’s a V6 or V8 you’re after, you’d better move on as the S90 continues Volvo’s current mandate of being the four-cylinder car company. No more, no less across its entire model range.

So two-litres, four-cylinders it is, but the car is helped along by both a turbocharger and a supercharger, meaning an enthusiastic response when pressed hard.

There is a smooth but slightly noisy sprint of 5.8 seconds to get it from standstill to 100kmh as the four pot is naturally more vocal than the six or eight cylinder alternatives. Its smoothness however, comes from the standard eight-speed automatic that seamlessly shifts through the rev range.

My only issue with the box was on the hilly drive programme it had a tendency to keep hunting for a better gear and kicking down frequently. This diluted the relaxed Swedish sauna feel given off by the blonde wood timbers inside.

Space is not an issue, with plenty of room like its competitors the Audi A6, BMW 5-Series, E-Class Mercedes, Jaguar XF and Cadillac XTS, for example. The front seats were exceptionally comfortable and supportive after a long day of country driving.

The electro steering wasn’t something I immediately warmed too, being too light for my liking and a touch reluctant to change lanes at speed.

This is partly due to the piloted driving that automatically maintains a set speed or distance to the car in front, as well as giving gentle steering inputs to keep you aligned within your lane markings at speeds of up to 130kmh.

We found that the system should be used as a guide only as some of the worn lane markings on the UAE back roads were not detected and it didn’t follow the lane as promised. So it’s a tool to use with caution.

Straying camels and other animals beyond the city limits can be detected in the same way as the S90 can spot pedestrians and cyclists around town, warning you and – if necessary – automatically braking for you.

Other driver assist features include active high beam that automatically dips to oncoming cars, a 360-degree camera for ease of parking and a Head Up display on the windscreen.

While I doubt the established players in this segment will be too concerned, the S90 does play the crucial role of the disrupter – the alternative to the mainstream – and for this reason takes a bit longer to familiarise with.

However, the S90 is a worthy player and one that definitely warrants a close and serious consideration.