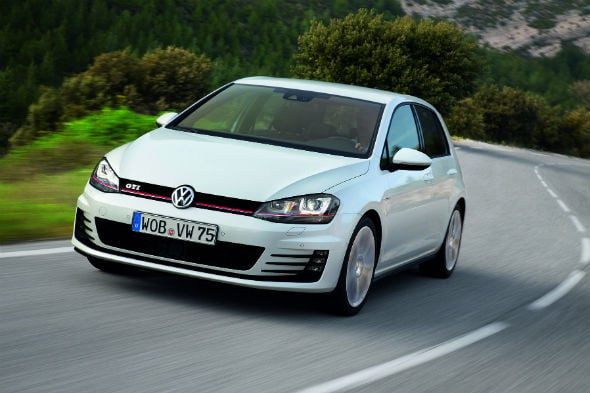 When a car is 37 years old and has sold nearly 1.9 million models to date, it can be regarded as something of a classic. This, the seventh generation of the Volkswagen Golf GTI, will surely in time become such a thing.

The new GTI carries the weight of expectation laid on by its predecessors, stretching back to 1976, with ease. It is quite simply a must-drive for hot hatchback lovers.

The new model ticks so many boxes from comfort to performance to looks, and at Dhs115,900 comes in cheaper than its competitor the Mercedes A250, priced at Dhs138,105.

The GTI’s interior boasts a tartan design – harking back to its Jackie Stewart-inspired era – though the car I’ve been given is classic black leather and red stitching, a combo that is quick becoming boringly recognisable across the industry. But the new GTI with its buckets seats, sporty steering wheel and subtle detail keep it interesting.

The touch-enabled screen gives a clear read out and is impressively responsive, with the option icons spookily appearing as your hand nears the screen. The sat-nav is an added option, while the rear-view camera is as good as any Gulf Business has tried thus far.

But it’s the attention to detail that Volkswagen has made with the new GTI that is so impressive. Take the air con as an example. What should be a simple device is all too often nowadays, in many cars, more complicated to configure than the International Space Station. But the GTI’s A/C is brilliantly simple as well as effective; a seemingly small but major importance in the Gulf.

Another nice touch is when selecting reverse gear the radio music automatically softens, presumably offering you greater concentration as you manoeuvre. It ramps back up to its previous setting as you accelerate away.

The reason you buy a GTI though and not a standard Golf is not for any of the above. Not really. You buy a GTI for the extra performance – for the added horsepower.

The 2.0-litre turbocharged direct-injection engine produces 220 horses to be exact. Factor in a weight-shred of 42 kg from the previous model and a more aerodynamically streamlined body, and the car maxes out at 244 km/h.

Gear changes on the six-speed automatic are smooth enough while front and rear disc brakes give a strong, responsive performance. The steering, and turning circle in particular, is a joy – just be sure to opt for the sporty steering wheel.

Possibly even better than how the car drives though is how it sounds. A constant purring, often turning into a growl, resonates under the car as if repeatedly reminding you it has more to give.

Put it into ‘sport’ mode and the noise, and performance, exceeds the already-passed expectations. The sound gets better and better as the rev needle inches into the red while fantastic, aggressive blowouts from the two chrome exhausts during downshifting cannot fail to bring a smile to your face.

All in all then, the new GTI is a brilliant car. If you have never been a hot hatchback fan, this car will change you. And if you have always been a follower, stop what you’re doing right now, and go and drive one.