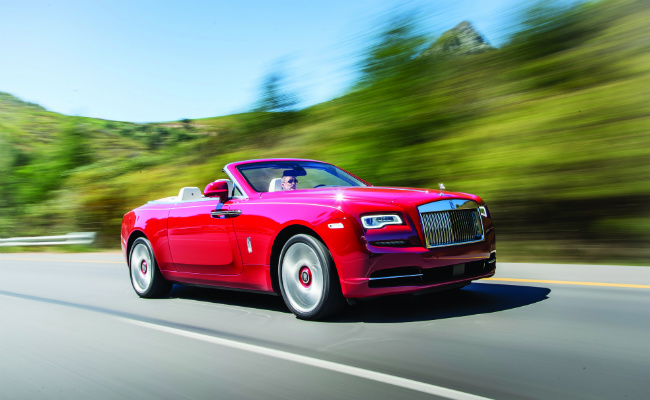 When you’re Rolls-Royce, you can choose any place in the world to find the best roads. For the launch of the Dhs1.3m Dawn, that place was South Africa.

If you’ve ever visited Cape Town, you’ll know the city has some of the finest, most scenic roads anywhere in the world, making this test-drive a particular joy. To top it off, the weather was perfect for roof-down driving.

The Dawn is based on the fastback Wraith – which was a breakaway model – and the most driver focussed car in many years with its BMW-derived 6.6-litre, twin-turbocharged V12 engine and eight-speed GPS-guided automatic transmission.

However, the Dawn is more than a chopped up Wraith. Around 70 per cent of its body panels are new, with Rolls-Royce claiming only the doors and rear bumper are carried over.

In terms of overall look the Dawn is also unique with a pronounced nose forward, wedged look that is at odds with all other models in the Rolls-Royce portfolio.

The company says it has worked hard to ensure the vehicle is as smooth and as quiet as the Wraith, Ghost or Phantom despite the absence of a fixed roof. They have definitely succeeded. It was eerily silent inside even when a sudden cloudburst hit, yet conversation could still be had despite heavy rain falling on the fabric hood.

It is claimed to be the quietest convertible on the market and the roof retracts in 21 seconds at speeds of up to 50kmh.

Plenty of additional structural bracing has also been added, making for one of the most rigid four-seat convertibles in the world. While being buffeted by strong winds during our drive, it never felt vulnerable and our six-foot tall passenger in the rear had more than enough legroom and headroom with the roof up over 80 minutes to satisfy me that the Dawn is a proper long-distance tourer for four adults.

It may be the baby of the Rolls fleet in terms of size but make no mistake it’s a big car and feels it from behind the wheel.

Yet it’s incredibly flat and composed on turn-in. The Dawn steers less like Rolls-Royces of old and more like a big modern GT. It inspires brisk, long distances behind the wheel even when pushing on wobbly B-roads.

Push it along through mountain roads and the confidence that comes from the heavily braced chassis and air suspension is helped by the GPS-aided box, which I didn’t notice until I braked for a corner and powered out to find that it had already dropped back from fifth to third.
This explains why there are no buttons for transmission modes like touring, sports or comfort that you find in other cars.

Priced at around 20 per cent above the Wraith, the Dawn is nearly in Phantom territory, which guarantees it will be remain one of the most exclusive cars to carry the Spirit of Ecstasy bonnet mascot.