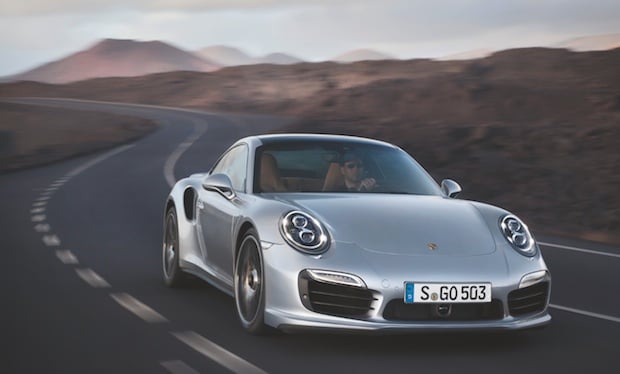 There are a few poster cars that every motor head must drive at least once in their life and the Porsche 911 Turbo is right up there at the very top.

It’s safe to say that without the Turbo, Porsche wouldn’t be where it is today. It makes up the tiniest percentage of the company’s global sales in comparison to the rest of the 911 range, which itself is the smallest selling model in the Porsche portfolio, but more or less every person who buys a Porsche eventually wants the Turbo.

The car is instantly distinguishable from the regular 911 due to its wide body and rear wing. This was the case with the initial 3-litre model back in 1974 and it’s carried through to today with this current version being 49mm wider at the front and a whopping 134mm wider over the rear haunches than its predecessor.

The frame is used to house the giant 20-inch diameter wheels, which put all 540bhp to the road courtesy of Porsche’s PTM all-wheel drive system. Complimented by rear axle steering, adaptive aerodynamics and the Torque Vectoring system.

The new front design features narrow LED daytime lights comprised of a double cross bar to give the nose a wider stance, and an additional louvre for the middle air intake.

Its side profile is distinguished by the trademark Turbo air intakes in the rear wheel arches and the new wheel design while the rear features new three-dimension tail lights as well as re-shaped, dual exhaust tailpipes exiting from the body moulds.

Thanks to Porsche remaining faithful to the original upright profile of the 911 that debuted back in 1963, climbing in doesn’t require the moves of a contortionist to get behind the wheel. Unlike its competitors from Ferrari, Lamborghini and McLaren, you feel like you’re sitting in a car and not lying in a bathtub.

As a result, visibility is brilliant all-round, there’s acres of headroom and you can also get out with some dignity in front of the hotel valet.

All this makes the Turbo useful as a daily driver, plus it has boot space up front for small luggage and two half useable seats in the rear that fold flat for extra storage. It is the most practical supercar money can buy.

The new-style interior is a welcoming environment with dual-zone climate air-conditioning; electric sports seats with cooling, a full-length sunroof, integrated satellite navigation in the instrument cluster and a new flat screen centre display.

Add to the equation a better steering lock than virtually any car on the road regardless of price or category and it seems that the new 911 turbo is almost too good to be true, ticking every practical convenience box as well as being an eye-catcher in traffic.

With 710Nm of torque, the 3.8-litre engine benefits from larger compressors for its two turbochargers and Porsche remains the only manufacturer to use two turbos with variable turbine geometry in a petrol engine. This provides a never-ending power curve and torque flexibility.

Selecting the Sport Plus mode also alters the aero kit deploying a front spoiler by 75mm and extending the rear wing by 25mm. This then protrudes further to 75mm with a seven-degree pitch to collectively give the car 132kg of down force at 300kmh.

The Turbo is easy to drive, fast, comfortable, practical and has an options list as long as its power curve. But given its ease of everyday practicality, the raw speed is phenomenal.