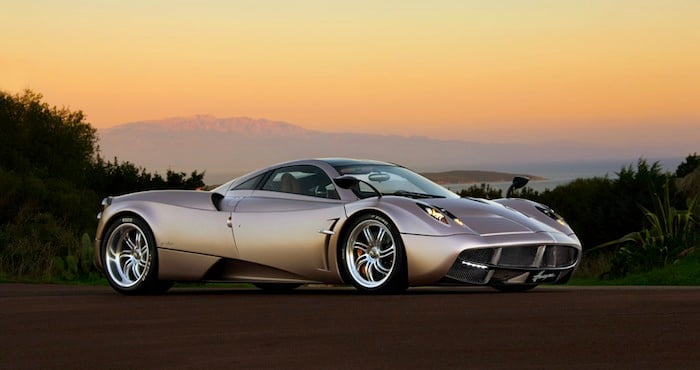 In today’s world of global amalgamation, the brand Bentley belongs to VW and the trademark of Ferrari is owned by Fiat.

But Horacio Pagani calls the shots when it comes to every facet of his Dhs 5.4m Huayra supercar. And here he was, listening to me of all people and asking what I thought of his newest baby.

I had just been handed the greatest of privileges, to take the Huayra for a few fast laps around the Yas Marina Circuit. All under the watchful eye of Pagani and his regional distributor, Montaser Al-Kuzbari, who heads up the Dubai-based Aladiyaat Group.

To grasp the Huayra’s carbon fibre steering wheel, to sink into its leather race seat and gaze your eyes over the ridiculously ornate polished metal dash and trim is something you need to do slowly; to savour, to drink in.

Everything is designed and built in-house with the exception of the Xtrac transmission and the Mercedes AMG-sourced engine. Even still, the engine is a bespoke unit not shared with any other product.

I twisted an old-school key that looked like a model of the Huayra carved from a solid billet of steel. I expected it to bark into life like a ferocious animal before settling to an angry idle but it was completely the opposite. Almost like a jet engine spooling up, it was a smooth whir of starter motor followed by a gentle burble.

After selecting first it was eerily quiet idling down the pit lane, only adding to the tension as I reached the exit. Knowing that it is rear wheel drive only, I cautiously eased on the gas but it was still akin to firing me like a canon straight over the blind crest to the first chicane.

On track, the Huayra is simply breathtaking and is one of the fastest cars I have driven at Yas in any form, road or race.

Touching 270kmh on the main straight was almost too easy, probably aided by the fact that it is so quiet. There is no ear-shattering snarl from the 6-litre, V12 behind your head, just masses
of whirs, fizzes and pops from the two turbochargers.

Pagani deliberately tuned this car to be quiet but in such a seductive way that it still stirs emotions. He based his research on jet engines and so, aside from the cockpit’s aviator look and feel, the Huayra also sounds like a fighter jet.

To save about 70kg, Pagani passed on the industry standard double clutch box and went with a single clutch Xtrac unit. This gives a meaty smack to the back of the head on up changes and throws you forward with each down click.The giant waste gates in the turbochargers sound like multiple cat sneezes each time you jam the throttle and lift off suddenly as your right foot orchestrates
a 750bhp, 12-cylinder, wind instrument behind your head.

The tight hairpin leading on to the back straight at Yas can snap the tail of just about any car, yet planting the right foot on the apex exit ensured the rear simply squatted as it put its power to the road. Through the rear wheels and off it went. No catching slides, it just did the job.

The active aero takes much of the credit for this as it has two small rear wings that operate independently depending on the pitch angle and brake position.

Two front wings mounted ahead have the same function. Looking over the snout as you jump on the brakes two air brakes appear in front of you. Watching them flick from left to right as the car
changed direction and throttle position was like watching a frill neck lizard preparing for attack.

In every sense this car is alive with each corner, reacting in split seconds with every command of your feet, fingers and brain. It is a car I connected with. I felt that I was a part of its performance success instead of simply being the controller behind the wheel.