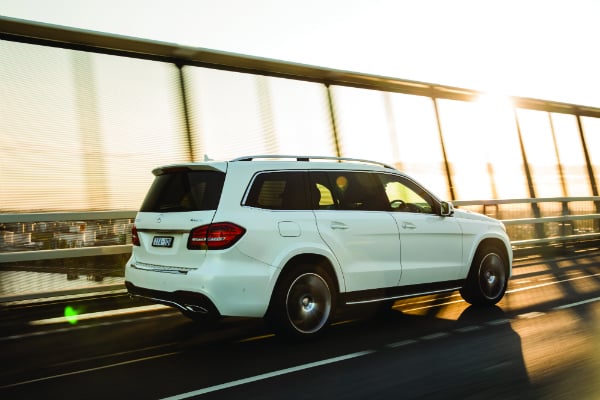 Mercedes-Benz has been working hard to simplify the badging process of its sports utility vehicle range to align them with its core sedan line-up. So while adding an S to the GL badge might not seem much from the outside, it hints at much bigger things within.

Just as the entry-level GLK SUV is now called the GLC to reflect it’s C-Class lineage, and the ML is now badged the GLE as the off-roading version of the E-Class, the GL is the all-terrain answer to the S-Class flagship. And with that comes a bag of upgrades to bring it into line with its saloon stablemate.

Our test version was the middle ground GLS500 with its 4.7-litre, twin-turbocharged, petrol V8 engine matched to a nine-speed 9G-TRONIC automatic transmission.

I was waiting for its endless shifting between ratios and hunting for the right cog but it surprised me by being flawlessly smooth to the point of not knowing, or caring, what gear I was in.

In most driving modes, the transmission starts in second gear to give it a smooth acceleration – free from sudden, unintended right foot movements. It only kicks off in first gear when you are locked in sport mode.

The car was brilliant, never searching for gears and restricting turbo lag to a minimum. When coupled to its 450bhp of power and 700Nm of torque from that gorgeously big, turbocharged V8, there was nothing that phased it on the open road.

Its air suspension combined with the4MATIC all wheel drive system allows the big off-roader to waft around the streets with grace but then hunker down and tackle twisty mountain passes in earnest.

It felt smaller and livelier behind the wheel than I could have imagined any seven-seat SUV and only when we had stopped after a long, enjoyable drive through the mountains were we reminded of its size when trying to squeeze into a parking space.

The seven seats are closer to being full size than its competitors but in the case of the Range Rover, the Merc already wins as the former is a five-seater only.

Up front, the driver gets the standard Mercedes-Benz treatment that is being carried through every model from the C-Class to the AMG GT to the SUV fleet and while the dash look and interior feel is becoming a bit samey, there is no denying that the cabin layout works well.

The GLS500 adds a panoramic glass electric sunroof with slide/tilt function, front seats that are fitted with heating and cooling ventilation, a heated second row of seats and a Nappa leather trim across all three rows. It also has an anti-theft protection package and a digital television tuner.

All the buttons and controls are within easy reach and are well labelled. The dials and instruments are easy to read at a glance, as is the large, clear central display screen which still stands proud and is the one feature that continues to look like an after-market addition.

It also invites you to dive into its labyrinth of screen options and menus should you decide to venture in using the centre console control wheel. Once mastered it does work intuitively.

Externally there is not a huge difference, although the keen-eyed Mercedes fan will spot its slightly wider grille opening. This pushes the revised headlights toward the outer edges of the nose, while new LED taillights and a reworked rear bumper highlight the changes at the rear. What is not noticeable, however, is the 90kg that has been saved from its kerb weight by using aluminium for the bonnet and guards.

Still, with a 3,500kg towing capacity, it is a genuine option for hitching up heavy loads. And when you stack up the versatility, off-road capability and people moving dimensions against its plush S-Class interior, the GLS ticks a lot of boxes in one handsome package.