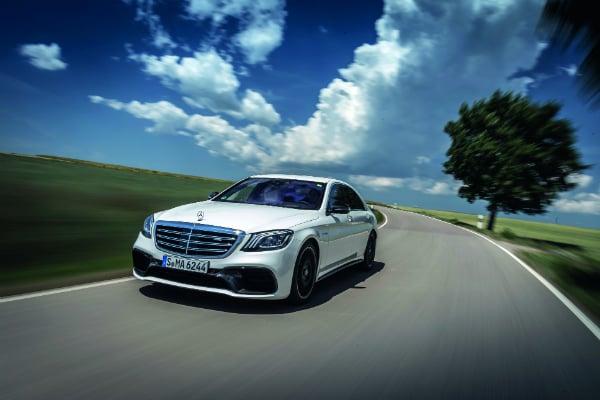 As the auto industry continues to broaden its sensory horizons; it would appear that ‘smell’ is going to be the next big thing in car creature comforts.

While most of the car design world is in the midst of an interior ambient lighting war to see who can out-dazzle and out-mood everyone else with rainbow coloured LED lighting, Mercedes-Benz has just lifted the game to a whole new level with its face lifted S-Class.

While we were driving around the Swiss Alps in the range-topping S63 AMG and S560 variants, I noticed the ‘energising comfort’ menu which is designed to create an interior ambiance via audio, lighting, seat massaging – and fragrance.

The menu offers the options of refresh, vitality, joy, wellbeing and training, and can also tap into your music collection so long as the beats per minute are appropriate to the aromatic themes.

It’s an addition that complements a midlife makeover for the S-Class, which heralds new engines, interior and exterior tweaks as well as enhanced autonomous driving features taken from the E-Class.

Its cruise control works off GPS info and can now adjust speed for corners, intersections and speed limit changes. It’s a weird feeling as the car slows for bends and then accelerates out the other side with no driver input. Indeed, it even carries more corner speed when you’re in the sport and sport+ modes.

When it’s in the default comfort driving mode, the cruise control slows the car down quite significantly for the curves – more than the car tailing us from behind and we were expecting. The fast acceleration back to the set speed will probably not give your driving prowess the best reputation – especially among those driving behind you who may want to overtake. So we preferred to keep it in sport or sport+ mode, which carried the extra momentum through the corners.

The big news on the engine front, however, is for a unit we probably won’t see – the all-new, inline six-cylinder plug-in hybrid, which features no drivebelts thanks to electrically powered water pumps, air-con compressors, turbochargers and an alternator incorporated into a 48-volt system with the starter motor.

The S63 is the big attraction for the Middle East and at Dhs642,880 it doesn’t disappoint, firing like a canon when the right foot is planted. Sprinting from zero to 100kmh in a blindingly quick 3.5 seconds, it now uses the nine-speed auto shared with the other models, instead of the seven-speed box in the previous version.

For a car so large and capable of carrying four people, its acceleration time is firmly in Porsche 911 turbo territory but like the responsible German it is, its top speed has been limited to a respectable 250kmh.

Leave it in comfort and it drops three or four gears to fire away but select sport or sport+ and it automatically locks out the top two gears as it plants its copious power through all four wheels.

The main changes inside include a new three-spoke steering wheel that’s flat bottomed for the AMG models with lashings of Nappa leather throughout. The dash carries over the updated look from the new E-Class by bringing the two 12.3-inch TFT screens together behind one sheet of glass across the dash. And the seats remain the best in the business – for driver and passengers, front and rear.