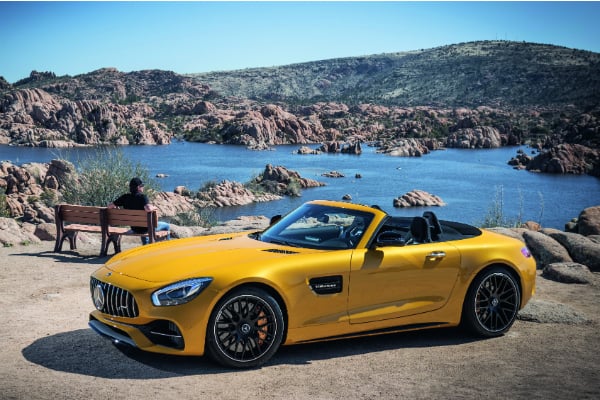 As night follows day, when a premium manufacturer releases a sports coupé, it follows it up a year or two later with a convertible.

This unwritten law of motoring has reached the four-litre, twin-turbo, V8 Mercedes AMG GT with the arrival of the Roadster. And while this addition to the ever-expanding GT range was entirely predictable, it’s brought with it a change in character over the coupé, making it more than just an AMG GT without sun protection.

Its predecessor, the gulwinged SLS AMG drew heavily on the company’s motorsport heritage for design inspiration whereas the AMG GT took direct aim at the Porsche 911 not only with its market positioning but also the swoopy rear and horizontal taillights.

Aside from a wind deflector behind the seats, the base Roadster is near identical to the coupé. However, the GT C version tested here, packs a few more features in to the cosmetic, comfort and engineering sides.

In performance terms, the GT C sits between the AMG GT S and GT R coupés, adopting the 57mm wider rear track from the GT R and with that, the fat rear guards to accommodate the GT R’s active rear-wheel steering, electronic diff and adaptive dampers, as well as its seven-speed, dual-clutch automatic transaxle transmission. The nose also gets a couple of extra nostrils to house two additional radiators that sit low and wide in the front corners.

It’s capped by 19 and 20-inch alloys, while both Roadsters now use the ‘PanAmericana’ grille taken from the GT3 racecar with its prominent chrome vertical stripes.

The GT C brings an extra 80bhp over the regular Roadster, which was immediately noticeable when we put its 550bhp to good use on the back roads. And if you may think that being a convertible it’s not as focused as the coupé, be reminded that the vehicle is now just 27bhp shy of the Lewis Hamilton-inspired GT R.

Oddly, the weekend track day enthusiast may prefer the GT C Roadster over the coupé as it not only gets the GT R handling goodies but also has an iPhone app, which analyses driving styles and allows them to be shared with other drivers on Facebook and YouTube.

Launch control is simple. With left foot on the brake and right foot on the gas, the revs rise to whatever the driver sets by clicking the paddle shift. Then it’s just a slip of the left foot off the brake for an instant burst to 100kmh in 3.7 seconds and on to a terminal 316kmh top end.

A flat-rimmed steering wheel and seats in Nappa leather welcome you as you open the door with the best part being an airscarf that blows hot or cool air onto the back of your neck when the roof’s down. Combined with the ventilated seats, it creates a climate-controlled cockpit despite being exposed to the elements.

Its three-layer fabric hood opens and closes in 11 seconds at up to 50kmh and being soft cloth, it doesn’t eat into the precious cargo space behind the seats.

While the rear steer worked well to dilute the nose-heavy feel, there were times it felt too stiff for the B-roads and cattle grids as both I and my co-driver found it to be rigid and jumpy on uneven or heavily cambered surfaces.

To keep its nose pinned to the road, the Roadster uses the GT R’s active air system of vertical louvers behind the front apron, which open and close in less than a second as the speeds rise and the big front wheels scramble for traction.

The AMG GT C encourages you to chase its limits, to dive deeper into corners, brake later, accelerate earlier and find its natural balance through twisting curves.

At Dhs635,000 it’s a rewarding drive that gets the adrenalin pumping, but when you back off and flick it out of sport mode, it cruises the bay side suburbs or takes in the city lights with the best of the boulevard cruisers.