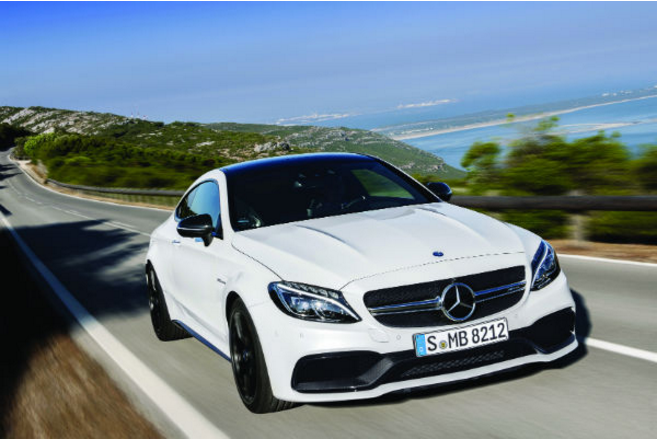 The new Mercedes C63 S AMG Coupé is a C-Class by name only and a full blown, high-horsepower, executive express by any other measure.

Unlike some of its competitors, which are clones of their sedan counterparts with two doors lopped off, the C63 Coupé is not all that close to its brother. One example of this is the intrinsic design alterations that extend to the suspension and the car’s overall footprint.

The C-Class is the last in the AMG range to fall into line with the new selection of engines. Despite its 63 badge, the car has dropped the naturally aspirated 6.2-litre, hand built V8 and replaced it with the cleaner, more efficient, twin-turbocharged, 4-litre V8.

Thankfully this still carries over that luscious deep, bass burble of its predecessor. The high-tech exhaust system features a bypass valve actuated by a button on the centre console that opens up three flaps inside the pipes to let it howl like an old-school American V8.

Essentially, it is the same unit used by the company’s AMG GT performance flagship and comes with the choice of two power outputs, one being the 469bhp version with 650Nm. The car at our disposal is the ‘S’, which enjoys more turbo boost as well as detailed changes to the inlet manifold and dynamic engine mounts that vary in stiffness depending on revs.

While it is 50kg lighter than the current C63 sedan, it is 70kg heavier than the Coupé it replaces and a whopping two litres smaller in engine size. But that does not stop it recording an extraordinary 3.9 seconds from zero to 100kmh with a top speed of 290kmh.

The seven-speed automatic transmission gives the car very different characteristics depending on whether you are in the smooth zone with the ‘comfort’ setting or ‘race’ mode.

In the sportier modes, the upshifts are crisp and quick but it is the intuitive downshifts that impressed me. After a short while I managed to initiate downshifts without touching the paddle by simply tickling the throttle at just the right point, mixed with a dab of brakes to make it drop back one, two or even three gears.

You can also just pull the left-hand paddle back and it will drop up to four ratios to within 1000rpm of the redline. This makes those flowing country lanes a blast.

The biggest change visually is from the rear, which now resembles a baby brother to the big S-Class Coupé. But it is not just for show. This new tail is needed to incorporate a rear suspension that is new to the sedan, but also to other C-Class Coupés, and takes up more room underneath.

The wheel track is 73mm wider than the regular C-Class Coupé at the front and 46mm wider at the rear over the standard C-Class Coupé. And overall it’s 45mm longer, 107mm wider and 12mm higher than before.

Even though the car has a higher roofline, you are sitting lower thanks to AMG’s own seats that are placed 20mm

closer to the floor than the regular units.

The flared wheel arches make it look fatter than the sedan and are also needed to house the giant rims, which are desperately needed in the rain to control that grunt. In fact, only the doors, roof and boot lid are carried over from its four-door brother.

Overall, the C63 Coupé is a driver’s car like no other model to wear its badge. As a weekend toy that I could occasionally take to a track day, I loved it. Could I live with it every day to drive to the office, shops and back? I’d be willing to take that risk and give it a good try.