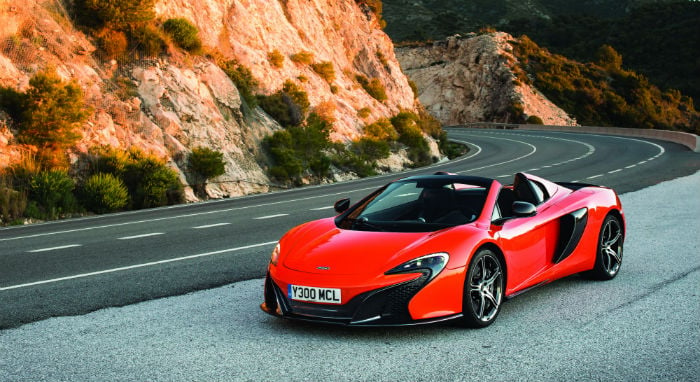 It was always going to be an ambitious target. Many had their doubts. But despite Formula One constructor McLaren’s relative infancy when it comes to building road cars, the company from Woking,UK has managed to fulfill its promise of releasing one new model every year.

In fact, since the 2011 launch of the MP4-12C, a name later shortened to just the 12C, McLaren has exceeded that promise when you take into account not just the Coupé and Spider versions but also the track day-focused 12C Sprint, the full blown GT3 race car and the range- topping P1 hypercar.

Yet the foot is not coming off the accelerator as McLaren demonstrated when it released the 650S in both hardtop Coupé and Spider convertible form at this year’s Geneva Motor Show.

Only now are these beginning to filter into showrooms globally and fortunately for us, the Middle East is at the top of its list.

I was lucky enough to be among the first to experience the new 650S, which has evolved from the 12C. In truth, the 650S began as a mid-life freshen up with a new nose and a few tweaks to iron out the usual bugs any first generation product typically gets. The result however is a major makeover that’s good enough for it to complement rather than replace the 12C, which remains the company’s entry-level model.

The most notable change is the nose, which resembles the P1, and is now the defined as the corporate look of McLaren, with its ‘swish’ logo incorporated into the dramatic headlights.

Admittedly, the rest does look identical to the 12C but a closer inspection reveals new carbon fibre aero blades at the base of the doors, revised side scoops, which feed more air into the mid-mounted 3.8- litre, twin-turbo V8 and a significantly stiffer carbon fibre tub.

The result of all those improvements is that 25 per cent of the 650S is completely new compared to the 12C while the nose is also more than just a pretty face, contributing an extra 24 per cent in downforce at 250kmh.

From the rear, the 650S looks virtually identical save for a new diffuser, which complements a recalibrated dynamic rear wing that pops up at speed to act as an airbrake. While it may not look too dissimilar, when behind the wheel, the 650S is a very different beast to drive compared to its donor parent model.

The good news for fans of drop-top supercars is that the 650S is just as stiff without a roof compared to the Coupé and has identical performance figures – those being 3.0 seconds to 100kmh (down from 3.2 for the 12C) and a 331kmh top end.

The roof folds away in 17 seconds, which can be done at speeds of up to 30kmh. However, on those hot days when you want to enjoy the full aural experience from that 641bhp engine just inches behind your head, you can keep the roof up but put the back window down for maximum impact.

There’s a slight premium for the Spider version, which retails at Dhs1.16 million compared to the Coupé’s Dhs1.05 million and then there’s an additional cost of around Dhs30,000 if you want the carbon fibre seats that were fitted to the test car.

Pricey perhaps, but they save 15kg from the already feather light 1330kg kerb weight and aside from the now standard Alcantera leather and an upgraded infotainment system taken from the P1, they are the only major change inside over the 12C. On the outside though, brakes have been beefed up with carbon fibre ceramic discs.

While it’s hard to find a major change in any one area, there are numerous changes spread across the performance, handling, aero, braking and comfort envelope that make the 650S a more focused, sharper, and a more comfortable drive than the 12C.

   If you’ve had the pleasure to sample the car it’s based on, then you’ll definitely appreciate the changes that have been made to create the 650S.