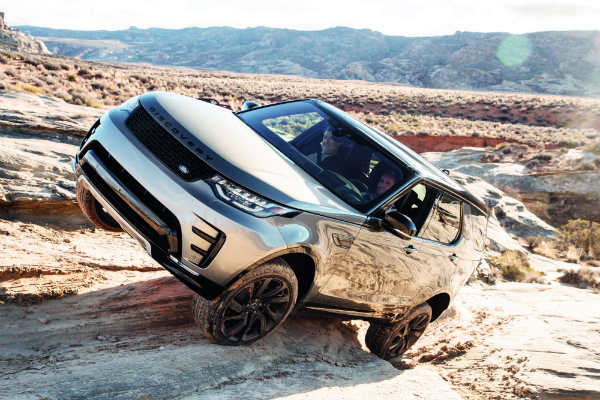 It’s a brave move, changing the face of the Middle East’s favourite car – the Land Rover.

geeks. It has shed its rugged, boxy, high-riding look with wide-opening single tailgate for a sleeker, lower and rounded shape.

The overhaul of the Discovery is the biggest in its 28-year history, both cosmetically and – thanks to a brace of new electronic driver and off-road aids – under the skin as well.

From the front it’s now got the characteristic Range Rover nose and even diehard fans are accepting this, albeit begrudgingly. However, things change once your eyes move past the C-Pillar and around to the rear. Here it’s decidedly softer and carries over a trait from earlier iterations – the stepped hipline around the back.

Reflected as an off set licence plate positioning, this gives the impression of wearing an eye patch and for obsessive compulsives out there, the lack of symmetry can be a little hard to take.

However, most Land Rover owners are loyal to the brand not because of what it looks like, but what it can do. The boxy earlier versions and the Defender were no oil paintings, but they did the job of off-roading better than just about anything else out there. And after my time with the fifth-generation, 2017 Discovery, I can say that this probably still stands true.

Being nearly 500kg lighter than the old model, after abandoning its old-style chassis and going for a monocoque construction comprising 85 per cent aluminium, it feels much more nimble and reacts to steering changes faster. But it’s the outstanding electronic Terrain Response System where the car really shines.

Depending on the setting it reacts to snow, mud, ice, gravel, road and more. And during our time, we encountered all of the above including several put together in one mushy, muddy, snowy, desert quagmire in the Utah highlands.

A particularly challenging 80-metre drop down a 30 per cent gradient sand dune that had a thin layer of ice on top with snow atop, tested the downhill descent control perfectly. Never touching the pedals, it guided us down easily without slipping on the snow or getting bogged down in the sand. Then, with a heavy right foot, I used the 340bhp and 450Nm of torque from the 3-litre V6 to power our way up the other side kicking up giant icy, sandy rooster tails along the way.

This mix of terrain and grip levels all at the same time would have sent many electronic differentials into frenzy and probably seen them default to the easiest setting. But the Discovery had the right amount of grip and power at the right time.

Likewise, its 900mm wading depth, 283mm of ground clearance and 500mm wheel articulation were all called into action for some extremely slippery mud trails.

Back on the sealed highway, the extra sound insulation over the old model was noticeable, as was the clearly higher-grade interior and comfort that’s now much closer to Range Rover than it is to Defender.

The factory claims that with its eight-speed auto the car will get to 100kmh in less than seven seconds and despite its still hefty 2200kg weight, it feels lighter and easier to manoeuvre around town as well.

Visually, while it may have lost the rear bubble in the roofline, make no mistake it’s a proper seven-seater with more room in the third row for two adults than many MPVs.

Overall, the new Discovery strikes a far better balance between school runner and off-roader than the previous version, and I became an unexpected fan by the end of the drive. A capable all-rounder even in the toughest conditions.