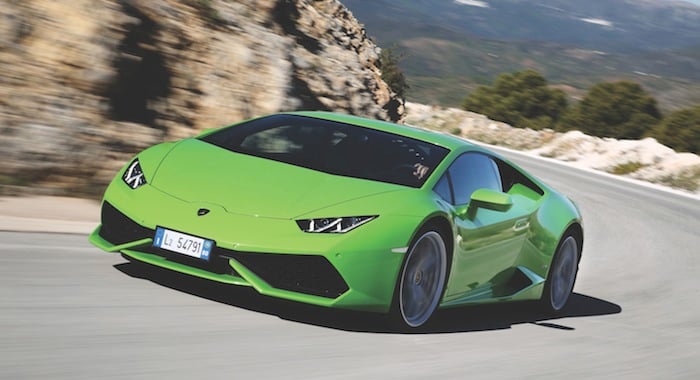 Very few cars would make seasoned auto journalists like myself sit in an underground car park with feelings of fear, apprehension, and agitation.

But that’s what the all-new Huracàn did to me.

A completely new car from the ground up, the Huracàn replaces the Gallardo in Lamborghini’s range and sits under the behemoth V12 Aventador. But it looks just as menacing from a distance as I approach it.

Its flush-mounted door handle pops out like a Swiss army knife inviting me to climb in. Inside it’s like a fighter Jet cockpit with a starting procedure to match. I literally have butterflies in my belly as I finger the key and thumb the unlock button of the 5.2-litre, V10 Huracàn.

However, you don’t just turn a key or push a button to get the Huracàn roaring. In the centre console, lies a bright red lever you flick up to ‘arm’ the car, which then reveals the start button.

Foot on the brake, a push of the button, a few computer-controlled whirs on the starter motor and then, like a clap of thunder, 10 finely honed, precision-built, alloy cylinders bang into life just inches behind your head before settling back down to a low base burble.

The red lever is then lowered back over the start button and you’re good to go. Saying that you simply drive a Lamborghini is selling both yourself and the car short, because you don’t just ‘drive’ a Lambo, you master it in the same way a rider tames his horse.

I say this not in a bad way, as the days of fickle, badly tempered supercars are long gone. I say this in a good way in that the car becomes an extension of your body as you gain confidence.

The feel through the pedals runs through the soles of your feet, making a direct connection between your toes and the throttle linkage while the steering is perfectly weighted to communicate every nuance of the road back to your fingertips.

On the open road, it fits like an old pair of jeans. That trepidation I had disappeared quickly. We had become solid friends by this stage and were aiming for the hills.

With so much power wrapped in a lithe body like that, it’s no wonder it can get you to 100kmh in 3.2 seconds and on to 200kmh in less time than it took you to read this sentence. Top speed is said to be 325kmh and I have no reason to doubt it after a few blasts on the open road.

While the V10 is carried over from the Gallardo, the seven-speed, dual clutch gearbox is new, so don’t be fooled by thinking otherwise just because it offers the same three modes of Strada, Sport and Corse.

The gearbox is greatly improved with faster changes and is smoother around town. For most of my driving, Sport was preferred as it delivered a nice rasp to the exhaust with more aggressive gear changes.

However, once the fun wore off and I wanted to just get to where I was going, Strada turned it into a sedate cruiser. Corsa is best left for track days if you want to test its limits without worrying other road users.

It is however the regular cruising where I also found the big difference between the Huracàn and its predecessors.

Spending time in afternoon rush hour traffic is not fun at the best of times and not long ago I would have been a bundle of nerves checking gauges and slipping a big, heavy clutch to drag a Lamborghini along at snail’s pace.

But the Huracàn was a breeze, making the driving experience more pleasurable than nervous.

A refined monster that will leave you questioning if it really is carrying the same badge as those grumpy Italian beasts of yesteryear.