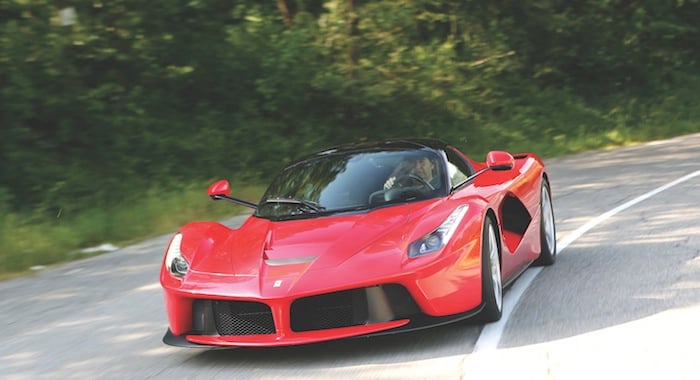 Not too long ago, I had the privilege of walking down the production line at Ferrari, the Maranello-based Italian luxury sports car maker, witnessing the birth of what will be the next great automotive investment, the LaFerrari.

Not that they want to encourage this sort of thinking – because in order to purchase a LaFerrari you first have to spend around Dhs6 million ex-factory, and not including taxes. Secondly, you have to meet certain criteria.

Potential owners must prove that they’ve bought two new Ferraris recently, purchased six in the past decade and somehow show that they are not speculators. It also helps if they can display a valid FIA motor racing licence.

And yet despite producing only 499, all of which have now been accounted for, they threw me the keys to their 950bhp, 6.2-litre, V12, hybrid supercar and pointed me towards their Formula One test track on a rainy day.

The plaque on the carbon fibre tub said this was Chassis #1/499 and another on the steering wheel said ‘Fernando Alonso’. With this kind of pressure, my palms were sweaty and my throat was dry as the gate opened to let us on to Fiorano F1 circuit, a private racetrack owned by Ferrari near Maranello.

LaFerrari owners have to visit the factory to have a seat fitting just like F1 pilots Alonso and Kimi Raikkonen as the seat is not much more than a piece of leather draped over a molded carbon tub that’s also made by the F1 team.

As result, you not only sit lower than in a conventional car but you also feel every nuance of the road and what the car is doing, literally through your backside. It’s surprisingly comfortable but gives you a raw connection to the car like nothing else out there in the market.

In the absence of a moveable seat, the steering column and pedals are telescopically adjustable and in no time, it feels like that the car has been poured around you.

The dash and steering wheel are similar to the 458 and F12, and so pressing the start button on the wheel greets you with the trademark Ferrari bark from its 12 cylinders. Dial in Race or Track mode on the manettino, pull the wheel-mounted lever back to select first gear and you’re good to go.

Unlike other hybrids and its competitors, the Porsche 918 Spyder and McLaren P1, the electric motor assisting the V12 is always running which means that the immediate acceleration is nothing short of explosive.

It took my breath away as my chest was compressed by the lateral G-forces.

All the while its 265×30-series profile tyres scrambled for traction blasting from 1200rpm idle to just under 9000rpm in a matter of seconds.

Even though it’s equipped with a pair of 398mm carbon ceramic Brembo brakes on the front, under all but the harshest conditions, the LaFerrari only uses the 380mm rear discs to slow down while the front wheels are slowed by the electric motor’s regenerative process. It only ever reverts to the front discs under extreme conditions.

Performance is quoted at less than three seconds to 100kmh with a top speed in excess of 350kmh.

Steering is old school, hydraulically adjustable with an electric pump, which means that its senses are not dulled by computer-aided inputs. It’s beautifully weighted, sending information from the tyres directly to your fingertips almost like an open-wheel racecar.

Idling through the local streets dodging delivery vans, tractors and smoke-belching Fiats, the LaFerrari looked like a spaceship. While I was expecting it to be the grumpy prima donna on anything but perfect surfaces, on these pot-holed, gravelly- shouldered streets that were as narrow as a farmer’s driveway, it was as composed as a contemporary GT tourer.

Having 161bhp just from the electric motor that supplements the 789bhp V12 engine, is like having VW Golf engine tucked away for those times when you want to take it over the edge.

At the end of the drive, I was left genuinely speechless. LaFerrari is a truly remarkable car that elevates the benchmark for supercars with future-proof road car technology.