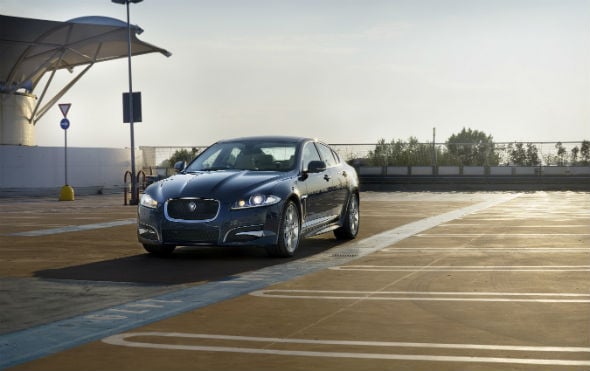 It was appropriate and not lacking for irony that on the day I was handed the keys to drive the Jaguar XF 2.0 was the start of the DP World Championship – Dubai’s prominent golf event.

Appropriate as it meant I looked the part as I arrived at Jumeirah Golf Estates for a day of spectating and ironic as Jaguar is often labelled, for better or worse, the choice of car for the leisurely golfer.

I should be honest; I’m a golfing fan. But I was more than happy when the sun set on the long fairways of the Earth Course and the day was over so that I could jump back in the XF and cruise home.

That is what you do in the Jaguar XF – you cruise. The two-litre turbocharged engine with its 240 horsepower may draw a hint of adrenaline when you really push the pedal down, but this car is not for aggressive driving.

The interior is incredibly comfortable without being ostentatiously luxurious, almost making it a car you would prefer to be chauffeured around in. But to do that would be missing out.

The ride is beautifully smooth, effortless and quiet. It was too easy to edge over the speed limit without intending to, such is the subtle nature of the XF.

That said, the XF does have a few quirky details that lend the car character.

The gear selector for the eight-speed automatic transmission is a round, flat, rotating knob. Unusual at first, I began to wonder why other cars haven’t caught on such was its ease and fluidity.

The air vents and gear selector itself hide away into the car when the engine is turned off, rotating 180 degrees and popping up into the open when you start the engine – giving the car a ‘sleep’ effect before being woken.

The front seats are probably lacking a few positional options, but the soft grain leather with in-built seat cooling makes driving comfort as close to perfect as you’re likely to find.

The seven-inch touchscreen on the dash is good enough and responsive though lacking in size compared to others on the market. The rear view camera is again good but with a larger screen it would have felt more exciting.

The rear view mirrors have a mind of their own. A blind spot monitoring system warns of other road users just out of view on either side whilst they tilt down on selecting reverse gear, making sure you don’t scrape the 19” caravela alloys when parking.

Dark brown canvasing leather covers the dashboard, pairing the cream seats and foot wells while an ebony veneer running throughout the car hints strongly at its British heritage.

On the outside the XF looks superb. A dominantly elegant bodywork mixed with aggressive, almost menacing headlights and radiator grill turned more than a few heads.

Despite its weight the XF never felt too heavy. Light steering, including a brilliant turning circle, matched the occasional moments of power the engine produced.

The backseats were comfier than the average platinum-screen cinema seats at Dubai Mall, although legroom was not huge. The deep boot though would explain that – those golf clubs need a lot of room.