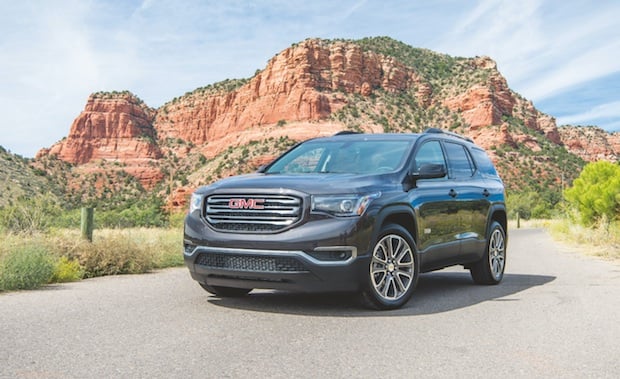 The Gulf region has an incredible fondness for any vehicle wearing the GMC badge. As one of its only export markets, the 114-year-old brand has found a welcome home in the Middle East, becoming a staple in the GCC in particular.

Known for its strong, dependable pickups, it reached into the suburban driveways and school parking lots for the first time in 2010 with its debut crossover, the Acadia. And after seven solid years the second-generation Acadia has finally hit the road.

The all-new 2017 Acadia will take the fight for family soft-roader supremacy to the likes of the Ford Explorer, Toyota Prado and Nissan Pathfinder.

Highlighting the importance of this new model, General Motors planned an extensive drive programme for journalists that took in nearly 1,300km over two days from Phoenix Arizona to Las Vegas, with a good mix of open highway, city and suburban crawls, light off-roading and challenging stretches of Route 66.

The GM reps were keen to emphasise that Acadia, even in all-terrain all wheel drive mode, is more crossover than off-roader, designed only for the occasional dirt track.

However, one thing’s certain after our time behind the wheel: the Acadia is a capable, long-distance tourer that would make short work of journeys around the wider GCC.

A solid seven or eight hour driving stint in conditions that were not too dissimilar to the mountain roads of Oman were taken in its stride with little fatigue and no back aches.

Despite shedding 318kg from the previous model, it still retains a towing capacity of 1,800kg.

The weight saving is largely due to the fact the first gen Acadia sat on the ageing Lambda platform, whereas this new model shares the same chassis as the just released Cadillac XT5.

With that come wholesale improvements for road and wind noise as well as improved stability and ride quality that will have to carry GM’s mid-range SUVs for the next decade.

Riding on 18-inch and optional 20-inch rims, Acadia’s ride was more sedan than SUV with its electric steering providing more accuracy, though less feel than its competition and noticeably little body roll.

All models include a drive mode selector with the front-drive versions offering normal, snow, sport and trailer/tow options, while the AWD variation provides an AWD disconnect that takes it back to being a FWD, in addition to sport, off road and trailer/tow modes.

The all-terrain gets an active twin clutch AWD system that transfers power between the four wheels during wet and icy conditions as well as enhanced hill climb capability. The top-spec, luxury Denali includes continuously variable ride control for the suspension.

Seating is a choice of two or three rows but when folded flat, offers 2,237 litres of cargo room as well as two under floor storage bins for smaller items. Captain’s chairs in the second row in place of the bench seat are optional but the best news is that the third row can seat two six-foot adults in relative comfort. All up, depending on spec, the Acadia can house five, six or seven adults.

Built in GM’s Tennessee factory, the 2017 Acadia’s interior is a breakaway from the more truck-like GMC offerings with plenty of Euro-look soft leather and timber trim capped by polished chrome and brushed alloy accents.

Additionally the Denali also has an 8-inch centre console display that’s hooked up to GM’s OnStar system. This provides 4G LTE connectivity the car’s own WiFi hotspot and as Apple CarPlay and Android Auto interfaces.