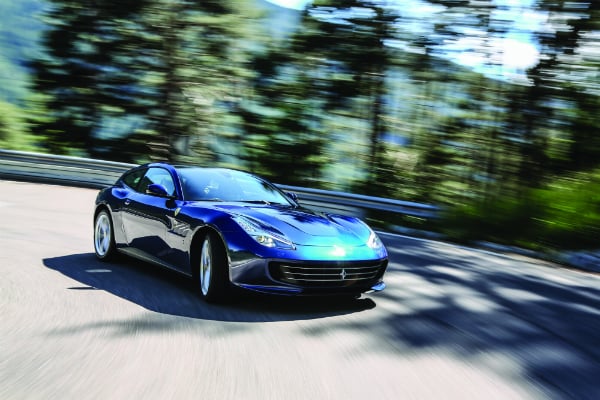 When I fired up the new 6.3-litre, V12 Ferrari GTC4 Lusso a little part of me died. Where was the fury of the classic Ferrari 12-cylinder engine wailing into life?

On the road, things didn’t get much better as I motored off down the country bypasses that meander through numerous small villages of northern Italy.

There was no fanfare, no growl, no stirring of the emotions, just a deep-throated murmur as we motored off.

Apparently this is what Ferrari owners want and as we were told during the press briefing the night before, the GTC4 Lusso’s aural tones have been diluted at the request of Ferrari’s loyal customers.

Fortunately, part of my faith in the Prancing Horse was restored as soon as we hit the Dolomites and I could open the taps wide open on the mountain passes, keeping the gears down and the revs up. But this is a different style of Ferrari. Perhaps it’s the Ferrari for grown ups while the mid-engined 488 can satisfy the younger, more eager types.

Apparently GTC Lusso owners are more likely to use their Ferrari daily tasks like mundane driving to the shops, carrying the kids home from football and even throwing the odd Ikea flatpack in the back.

This was the message from the presentation, complete with pictures of current FF owners doing just that. The GTC4 Lusso is more than a new name for the outgoing FF as it features a major reworking of mechanicals and ergonomics and despite looking similar, save for the nose and tail, it features completely new sheet metal.

With new pistons providing higher compression, new exhausts and a complex new burn from the spark plugs for greater economy as well as power, the V12 now produces 680bhp and 697Nm of torque compared to 651bhp and 683m from the FF.

While it no longer howls like Ferraris of old and is marketed as the family get-about, there’s still some red blood in those Italian veins and so Ferrari claims a zero to 100kmh time of 3.4 seconds, 10 seconds flat to 200kmh and a top speed of 335kmh.

Of course, the other trait carried over from the FF is that it’s all-wheel drive which makes for tidy handling around tight mountain passes given there’s so much weight hanging over the nose.

Tipping the scales at almost two tonnes, it doesn’t provide the slingshot, fire out of a canon acceleration you get from the little turbo V8 Ferrari 488.

Instead, it builds up a crescendo of speed and you don’t notice the smooth, tidal wave of power until you’re already in the hyper zone. It’s also at this time that you can watch the fuel gauge drop in equal measure.

On the fine, windy roads after the traffic cleared, my chance to test the car’s mettle came as a Porsche 911 turbo hovered into view with its driver up for a bit of sport. Had I been in the 488 GTB it could have been a different story, but a hill-climb sprinter the GTC4 Lusso isn’t.

This encounter showed me that the car’s forte is long-legged, long-distance interstate cruising and not so much the point and squirt fangs through tight second gear mountain hairpins.

Having said that, the Lusso grew on me. Its styling is like nothing else and yet it can only be a Ferrari when you see it. And unlike the 488GTB and Spyder, it’s useable as an everyday car but also belongs to that ever-shrinking V12 club.