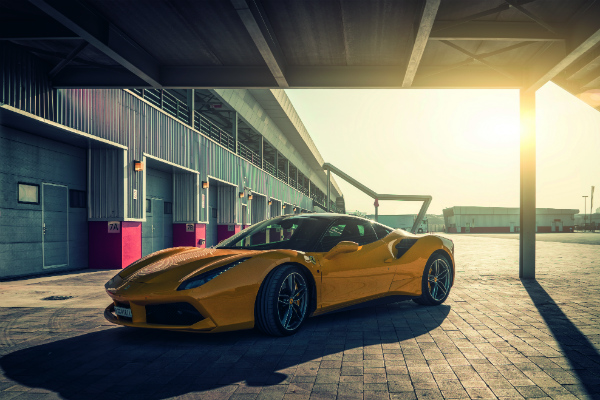 If you were to ask about the quintessential Ferrari, I would argue that it has to be the mid-engine V8 – even going right back to the car that defined Ferrari in the 1980’s, the Magnum PI 308.

Harking back to the great 308, the new 488 has revitalised the GTB badge for the hardtop, with the ‘B’ standing for Berlinetta. But it also has the drop-top, which was dubbed ‘Spider’ from the 308 onwards.

The 488 is an enigma in that it rekindles a bygone era with the 488GTB badge yet has a foot in the future by introducing turbochargers to the game, with the aim of reducing emissions.

My first experience with the 661bhp, 3.9-litre, twin-turbo V8 was on the Dubai Autodrome circuit. Being used to the sewing machine-like revs from the old V8s that would sing to oblivion, I was disappointed that this is no longer the case.

The newer turbo engine bounced off the rev limiter several times and encouraged earlier changing up of gears, almost diesel like by comparison thanks to its 760Nm of torque being developed at just 3,000rpm.

It gives you an idea of the power that’s ready to be unleashed, more in fact than the fabled V12 Enzo which itself was superior to the F50 that used a V12 engine pretty much taken straight from Alain Prost’s 1990 Formula One car.

While the 488 may look like a mild refresh on the outside over the 458, there’s a lot more underneath that completes the picture. If the steering feels almost go-kart light it’s because the steering rack and dampers are from the limited build 458 Speciale. It also gets a new generation of that model’s innovative Side Slip Control while the brakes are borrowed directly from the uber-exotic LaFerrari.

The 488 GTB is the manufacturer’s first series production car to get active aerodynamics and there’s also a revised version of Ferrari’s spectacular seven-speed, dual clutch gearbox as standard.

The back was a bit skittish and initially I didn’t have the nerve to push on, but once accustomed to the way it handled the bumps, it was a case of biting the bottom lip and going for it. I was surprised – and relieved – when it not only did everything I asked of it but almost before I had asked it.

When it comes to the Spider there’s not much difference despite the lack of roof. It shares the GTB’s spring rates, which are claimed by Ferrari to be equal to those of the outgoing 458 Speciale. So the point and change of direction is identical.

The Spider is 50kgs heavier than the GTB, which is the same deficit the 458 Spider has over the hardtop 458 Italia.

Its roof operation is identical to the 458, meaning it peels off and backflips into a slender compartment behind your head. It still takes 14 seconds and operates at speeds of up to 50kmh but it’s also 25kgs lighter than the fabric hood used on the earlier F430 Spider and is better than the California T, which takes 20 seconds to drop and has to be stationary.

Weighing in at 1,525kgs over the GTBs 1,475kg, the Spider has a fractionally lower top speed of 325kmh to the GTBs 328kmh, but they are identical to 100kmh at three seconds flat.

The Spider may not return the same spine tingles you get from a 9,000rpm change up on the 458, but point-to-point it is diabolically quick and that sensation usually hits only after you stop to think about it at the end of the ru