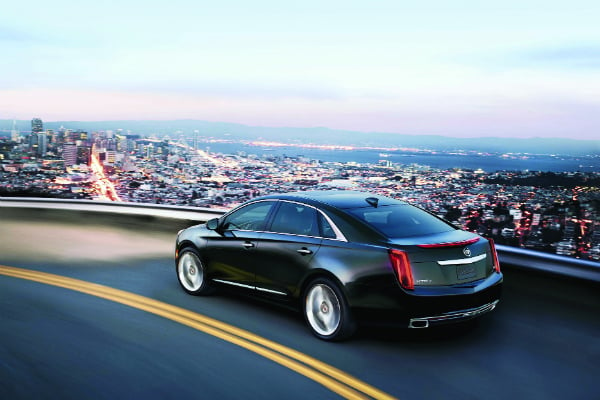 After trying to please the European market with smaller cars like the CTS and sleek coupés, Cadillac is going back to doing what it does best – big, bold automobiles.

The first one to hit our shores is the range-leading CT6. I am refraining from calling it ‘flagship’, because word has it that a bigger Caddy will follow a few years later which will probably also see a return of V8 power and possibly some kind of hybrid or electrification of the drive train.

But in the meantime, the all-new CT6 leads the way as the biggest in the range, taking on the likes of the BMW 5-Series and even the regular wheelbase S-Class Mercedes-Benz.

The great thing about modern Cadillacs is the design language that ensures that even from a mile away there is no mistaking them for anything else on the road. The car’s vertical headlight treatment has been accentuated by daylight LEDs that run from below the front bumper to over the hood with similarly tall taillights bookending the boot lid.

They make a dramatic statement and judging by the looks from pedestrians when we lurked through the downtown city streets of Los Angeles, the details certainly grabbed plenty of attention.

Cadillac’s design team deserve credit for taking a path no other car maker wanted to venture down. The horizontal look eschewed by every other manufacturer is a measured tactic used to make a car look wider. What should make the Caddy stand tall and ungainly only makes it appear more masculine and yet somehow still seems wide, with a fat presence and footprint. It is a reward for successfully breaking the mold of modern saloon car styling.

Big it may be, but the engineering brief was to make the CT6 light. And so it features an aluminium-intensive structure that incorporates 11 different materials. It is said to be 99kg lighter than comparable models using steel. So,while the interior space is roughly equivalent to a short wheelbase BMW 7-Series, its weight is closer to the 5-Series or Mercedes E-Class.

On the road this means better fuel economy but it also means more direct steering and a sharper feel through the front end than I was expecting. With Cadillac’s traditional design of a set back cabin and long front overhang to give it that classic long, low profile, I was expecting a lazier feel through the nose but it felt more like a taught front-wheel drive instead.

Inside, there are five massaging programmes for the leather seats. These reclined in the rear of the test car and included HDMI and USB ports built into the armrests.

The quadzone climate air-con uses a secondary system that allows passengers to personalise the temperature and airflow for each seating position, along with ionising air purification.

Other cool features include new LED lighting and a brilliant Bose Panaray premium audio system, which has been designed from the ground up just for this car. For this reason it features no fewer than 34 speakers.

Cadillac’s CUE user interface system has always been one of my favourites as it pioneered the use of haptic technology, which sends different pulses back through your fingers when you press the touch screen commands depending on the task you are performing. It also debuted capacitive touch which senses when your fingers are close to the screen and automatically brings up sub menus before retracting again.

Several engine options are available including the 3.6-litre V6 but our test car was the range-topping 404bhp, 3-litre, twin-turbocharged V6 that comes with an eight-speed automatic transmission and all-wheel drive.

The CT6 is the first in a new wave of Cadillacs that the company hopes will be a rosy new era for the quintessential American marque.