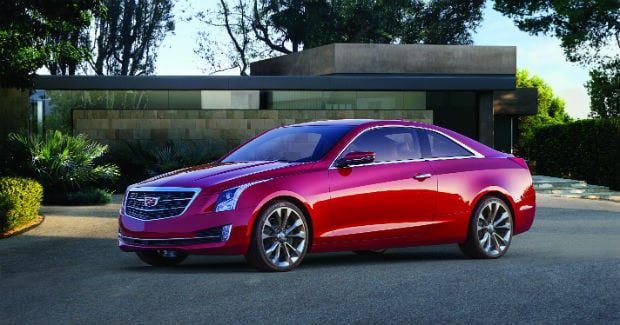 Compared to the ATS saloon, the coupe’s sleek and tapered roof line looks fantastic but it costs an inch of front seat headroom and more in the back. Good enough for children but maybe best used for short distances for adults.

One of the endearing things about Cadillacs is that the distinctive styling is genuinely innovative. It hasn’t copied and hasn’t been copied by other manufacturers.

The ATS coupe uses the trademark vertical tail lamps. Somehow, these don’t make it look too tall. From the rear the car still looks wide and squat, capped by a small spoiler in the bootlid and a thin band of brightwork running under the boot lip.

Aiding the car’s purposeful poise on the road is a slight increase to both the front and rear track, which gives it a meaty footprint rivalling the 4-Series’ aggressive stance. However, from the nose, the streamlined grille – featuring the revised Caddy badge without the wreath for the first time – gives a modern twist to the egg-crate grilles of previous generations.

If it is techno-geek features that win you over, then the Cadillac’s in-car infotainment CUE system is the best in the business – superior to the German offerings in both features and functionality.

Its tapping, swiping, flicking and pinching gestures as well as the haptic, pulsing feedback you get through your fingers when you’ve pressed a virtual button is the best out there. Simple and effective.

If you can use a smartphone, you can navigate your way around the car’s GPS, stereo and phone connectivity without spending 20 minutes wading through on-screen menus.

The Cadillac is a welcome addition to the small, executive coupe market. Until now, it has been virtually the sole preserve of the German manufacturers.