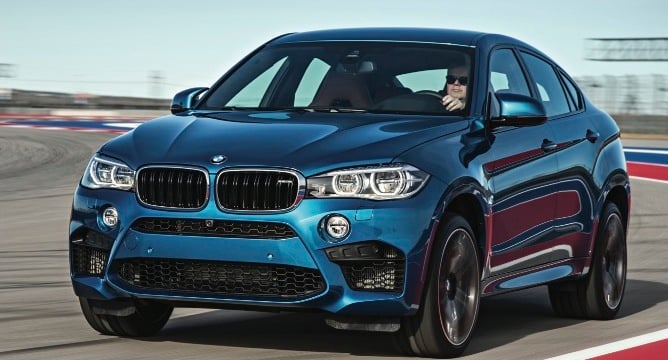 A race-track is a strange place to launch an SUV and yet here we are on a rain-soaked day, with the the pit lane light going green, signaling me to take the BMW X6 M on to the tarmac.

The venue for the global reveal of the X6 M was the Circuit of the Americas track, home of the United States Formula One Grand Prix in Austin, Texas.

Despite the state being in a long-term drought, the clouds had come calling and for a while, the place was like an ice-skating rink.

BMW had selected the venue for us to try out the immense power of the new motorsport version of the X6.

However, the soaking rain also gave us plenty of opportunities to see how its traction worked in getting that power to the road under super greasy, slippery conditions.

Admittedly, there were a few hair-raising moments as the car struggled to stay on line or let its tail wag on the exit of corners.

But then again, according to our independent data logger, we were hitting 212kmh on the back straight in blinding rain, through some puddles that could qualify as ponds.

The X6 M features the most powerful engine ever developed by BMW for an all-wheel-drive vehicle with its TwinPower turbo technology via a pair of twin scroll turbochargers.

The 4.4-litre V8 produces a staggering 575 bhp from 6000 rpm, which is up four per cent over its predecessor. Peak torque has been boosted by 70Nm to 750Nm that’s also up by 10 per cent and offers a meaty torque curve from just 2200rpm right through to 5000rpm. Power is driven through an eight-speed auto transmission and it hits 100kmh from zero in 4.2 seconds on its way to 280kmh.

Our chief instructor on the day was German DTM Touring Car racer Augustus Farfus who called the shots from up front via two-way radio. This was welcomed as his car was impossible to see through the rain spray, so when he said ‘brake’ you jumped on them hard, when he said to keep going flat, you put your faith in his words and kept the throttle buried.

My faith was also placed in the six-piston brakes and BMW’s xDrive all-wheel drive system that made sure I didn’t spear off into the wilderness.

xDrive employs an electronically controlled, multi-plate clutch to allow fully variable distribution of drive between the front and rear axles. Its default setting gives the car a rear-wheel bias but it can transfer up to 100 per cent of the power to the front or rear wheels depending on where the traction is needed.

For the enthusiastic driver, what this also means is that its rear-drive bias does away with understeer that’s often dialed into most cars and particularly SUVs from the factory.

BMW has also given us a display with arrows pointing at all four wheels visualising where the engine power is being sent.

This is a brilliant idea for trudging through slippery off-road conditions like sand, snow or mud so you can place your wheels optimally at a crawling pace. Though it is not really something you need at the race-track.

Considering this is the M version of the X6, which means it’s been fettled by BMW’s Motorsport division, it’s not surprising to see some electronic tweaks from BMW’s other high performance models like Dynamic Stability Control make its way on board.

The DSC counteracts understeer and oversteer with computer-controlled brake inputs but it also allows the driver to choose a Dynamic mode which lets the car slip and slide a bit for the sportier drivers.

On our track, this was perfect as it let it slide, but not too far. Mild drifts came into play before the driver aids kicked in and stopped up from going off completely.

Visually, the X6 M features large air intakes that feed air to its 10 radiators. It also has the trademark side gills and four exhausts peaking through the rear spoiler.

The whole car sits lower on fat, 20-inch or optional 21-inch alloys and comes in an array of BMW M specific colours, which will ensure that it stands out from the rest in the car park.