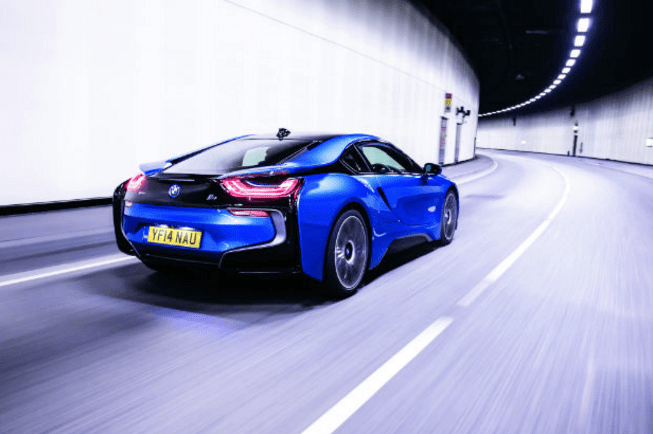 When BMW revealed the i8 coupe to the world as a concept way back in 2009, it was heralded as the future of driving.

There is a 1.5-litre, three-cylinder turbo- charged engine from the Mini Cooper hiding under a drop-dead gorgeous aesthetic. It has got the performance to beat most V6 and even some V8 competitors. Performance is boosted by its lightweight construction and an innovative electric motor that assists the petrol engine by powering the front wheels.

The car is made from the lightest and strongest materials using the most advanced techniques that BMW could apply. It is driven by a revolutionary plug-in hybrid, all-wheel drive powertrain.

The engine sits behind the driver and on its own develops 231bhp and 320Nm of torque. Running through a six-speed auto- matic box, it drives the rear wheels as well as a high-output starter-generator electric motor. This sends power back into the 7.1kWh lith- ium ion battery sitting under the car’s floor.

In addition, the electric motor in the nose drives the front wheels and produces 250Nm of torque with the equivalent of 131bhp. But, unlike most other plug-in hybrids, it drives through its own two-speed automatic gearbox.

This is unnoticeable to the driver and shifts ratios seamlessly with no input. It also allows the electric motor to use all of its 250Nm at much higher road speeds than would otherwise be possible. With both motors kicking along, the combined outputs for the i8 are 362bhp and 570Nm. These numbers are good enough to peddle it to 100kmh in 4.4 seconds and onto a governed top speed of 250kmh.

They are astonishing figures if you think of the three-cylinder engine as the primary powerplant. The enormous and instant torque from the electric motor leaves most cars in its wake when it comes to overtaking.

Leaving the i8 locked in fifth gear, it accelerates from 80 to 115kmh in 3.3 sec- onds. This is faster than a Porsche 911 3.4, which has to go back to second gear to eclipse it. Even the Jaguar F-Type V6 S with its supercharger has to drop back to fourth to catch the BMW. The i8 is also quicker than those two to both 100kmh and 160kmh.

It makes for an exceptionally easy drive but you have to train yourself to keep a close eye on the speedo. That endless surge of torque delivered so smoothly can fool you into thinking you are not going all that fast. Often, without warning, you are soon bar- relling along.

Select ‘sport’ mode and the car will hold a gear at high revs. Chase the red line and the engine feels willing and power- ful but never more so than when you are simply whizzing along in a high gear or picking off an unhurried overtake.

Power under foot is smooth. But when you are pushing it along and using both motors you can feel a torque bias through the front wheels connected to the electric motor.

It takes a bit of getting used to, although just a quirk of driving such a radically different type of car. The brakes are sen- sational thanks to a combination of large discs and the energy recovery systems for the electric motors.

Keeping the car’s weight down to 1,485kg is the extensive use of exotic materials including resin-injected carbon- fibre-reinforced plastic. Front and rear subframes and crash structures are built in aluminium to create a super-lightweight body that is 50 per cent lighter than conven- tional materials.

Climbing into the car feels dramatic thanks to the huge doors that swing up and the swathes of electric blue highlights through the cabin. However, the interior is fairly conservative by comparison. Espe- cially if you are already familiar with modern BMW ergonomics.

I have been waiting a long time to sample the i8 in order to see if the future will still be exciting for the weekend sports car driver. I have to admit that I am might- ily impressed.

We managed to squeeze 36kms around town running on nothing but pure elec- tricity during the boring parts of the daily commute. Yet, we still had a blast on the open road blowing away cars with more than triple the engine size while squeezing out 410kms before needing to refuel.