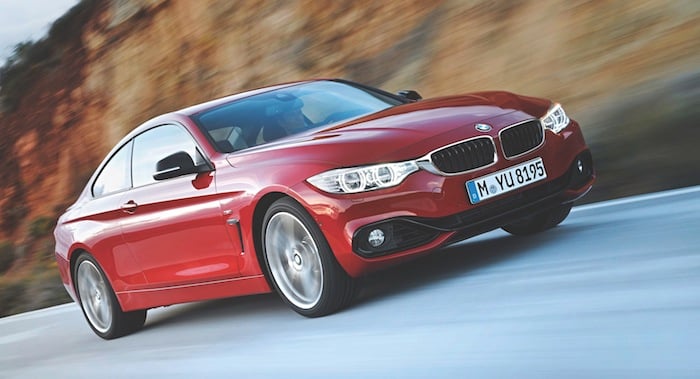 It’s only a number right? And yet with the change of a single digit, BMW has seemingly re-aligned the planets.

Or at least that’s what diehard BMW fans will tell you when the company decided that its 3-Series Coupé will now be called the 4-Series while the saloon that it’s based on will remain badged as the 3-Series.

Still with me? It’s not that hard, you see there is logic behind this, as originally, the 3-Series was a model you could buy with two doors or four. Other than the extra rear access, the cars were virtually identical.

Fast forward to 2014 and what we see here is the new BMW 435i M coupé and sure, it looks like the 335i saloon it’s based on, but gaze a little closer and you’ll see that it sits a touch lower, it’s girth is a tad fatter and its wheels front to rear are spread a tiny bit further apart.

So in fact, it’s quite a different car and to give it its kudos, it deserves to leave the 3-Series nest and become a model in its own right. Even more so when you consider the 4-Series has just sprouted the four-door Gran Coupé version. But that’s far too confusing to get into here.

The 435i’s bonnet is the only panel that’s been carried over from the four- door version. Compared to the 3-Series sedan, the coupé is 25kg lighter, sits 16mm lower, has 45mm more length in the wheelbase and the rear wheels sit 80mm further apart. So when you park it next to a 335i saloon, it’s got muscles on muscles, especially over those rear arches.

BMW’s 3-litre, twin-turbo six is one of the standout engines of the decade but when bolted into this taught body and backed by the latest gen, eight- speed auto, it’s an absolute gem. The power band seemingly never runs out and yet it’s as docile and as compliant as your rental Yaris at walking pace. Just smoother, way smoother.

At low revs, it’s quieter and smoother than any straight six that comes to mind and even under full load at low revs, it behaves beautifully. From about 35kmh in fourth gear and from less than 50kmh in sixth, where the engine has to pull from under 1000rpm in both cases, its torque is linear and smooth, dragging the car without hesitation and past 100kmh in less than five and half seconds.

There’s no sudden rush of turbo boost as the tacho needle passes 2500rpm, which allows the power to swell in a linear fashion. There aren’t many forced-induction, six-cylinders on the market that pull right through to 7300rpm so effortlessly.

BMW has created a great-looking car with the ability to carry four in comfort and deliver the sort of engaging dynamism and soothing mechanical refinement we’ve come to expect from a car wearing the blue and white roundel.

If there is a criticism, it’s the same one that’s carried through the full BMW range and it’s the depth you have to delve in the car’s iDrive system to set up the chassis and suspension settings to get it just right.

It’s great for it to be that flexible but you need to do it before setting off.

Once done though, my faith is restored in what is one of the finest rear-wheel drive chassis’ on the market today. You can change the badge all you like, but the 3-Series and now the 4-Series Coupé continues to be the most rewarding drive, even if sets you back a cool Dhs280,000.