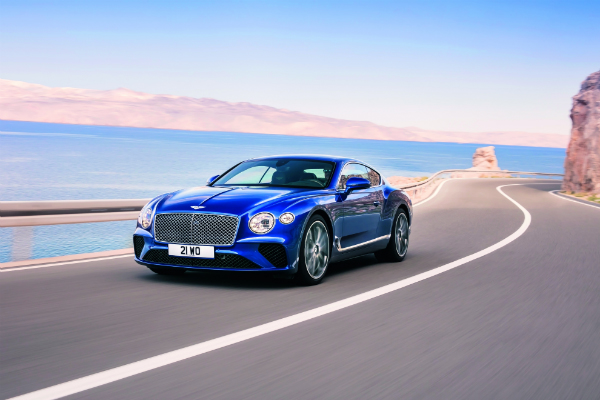 Due to hit UAE showrooms at the end of the year, Gulf Business had an exclusive preview of the all-new coupé which is fresh from the ground up, being based on the new MSB platform it co-developed with Porsche and shares with the Panamera.

Aside from the new 626bhp, six-litre W12 bi-turbo engine introduced in the Bentayga, it also gets the SUV’s clever 48-volt Dynamic Ride System rear anti-roll suspension and an eight-speed, dual clutch automatic transmission that drives through active AWD.

The previous model’s 60:40 split torsion diff has been replaced by a constantly variable unit that can transmit up to 1000Nm of torque to the front wheels. A maximum of 38 per cent goes to the front in comfort mode but it can still send another 400Nm forward if it detects too much understeer. Only 17 per cent of its torque goes to the front in sport mode to maintain a rear drive feel.

The new-look Conti mimics the EXP10 Speed 6 concept from the 2015 Geneva Motor Show with a lower, wider stance and a concave tail featuring the word ‘Bentley’ as a badge for the first time. It has also shed 85kg with the extensive use of composite metals.

“We’ve used a lot of aluminium for the castings, extrusions and main structural nodes in addition to high strength steel for crash performance and we clad the outside in sculptured aluminium pressings,” chief project manager Bob Teale told Gulf Business.

The front axle has moved forward 135mm not only for better weight distribution but also a more aggressive look.

“We were able to use the 110mm longer wheelbase to maintain the height of the car, but also by widening each side by 25mm, we improved the stance, especially when combined with the reduced front overhang,” said director of design Stefan Sielaff

The inside is a radical departure from previous Bentleys and differs from the Bentayga, feeling lighter and more spacious despite maintaining the Bentley hallmarks of timber, leather and chrome.

Ambient mood lighting includes razor thin LED strips across the dash and down the doors into the rear where it imitates the outside’s wide hips.

A new ‘diamond-in-diamond’ interior pattern shows that handcraftsmanship hasn’t been neglected with exactly 712 stitches in each diamond using 2.8km of thread per car. Over the full interior, this consumes 12 per cent of the 10 leather hides used in the car.

Not content with just one timber veneer, buyers can now specify two on the dash and doors, split by a chrome strip, while a new 12.3-inch navigation screen is hidden behind a clever panel that rotates to show either a trio of analogue dials or continues the clean timber look. Not surprisingly, the new Continental also includes the latest in self-driving Level Three autonomous features developed by Audi.

The previous GT sold 66,000 units but was desperately in need of a major overhaul as it is the staple product in the company’s range.

With inspiration from the R-Type Continental of 1952, the current look GT effectively re-launched Bentley under VW’s ownership in 2003.

It also introduced the W12 engine and all-wheel drive architecture that are now hallmarks of Bentley’s engineering DNA. A major facelift was revealed in 2011 but it effectively was still centered on the 2003 original.

With the all-new 2018 model, Bentley looks to have caught up in terms of technology, design, innovation and powertrains but the question remains as to whether it will have surpassed its competitors on the road