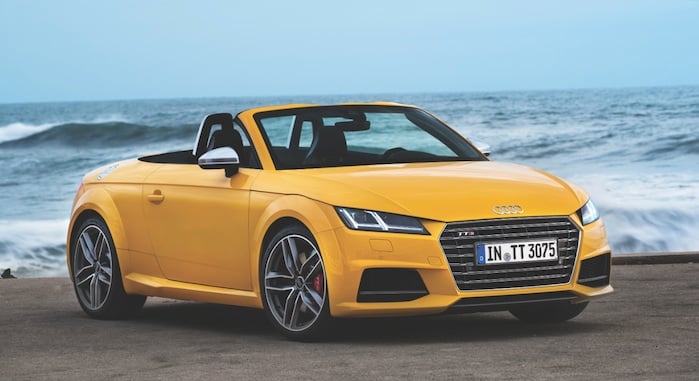 Everyone knows that the original TT was mostly style over substance, something Audi has never tried to hide. It was launched in the midst of the retro-loving 1990s, when we saw the rebirth of the Mini and the VW Beetle. The first TT was a clear reference to Audi’s take on the 1930’s Bauhaus design principal.

So now we come to the third generation TT Roadster and while it still has some of that early design influence, it is now far more of a driver’s car than the previous two iterations.

The new TT was designed first as a roadster and a coupe second. So it does not carry the weight compromise you normally get when the roof is cut off. When combined with the latest form of Audi’s Quattro all-wheel drive system, it is an absolute delight on windy roads.

Luckily for us there was no shortage of tight, narrow roads in Spain where it felt perfectly at home. While the weather was brisk, the sun was out which meant it was still good enough for top down motoring all day.

Even at this time of the year, with snow still visible on the mountain caps, we were grateful for the heated seats. As well as the heated air curtain, which blows hot air on the back of your neck, and the wind brake behind our heads to keep everything in check.

When this is not enough, the fabric roof can be lowered in 10 seconds – functioning even when you’re travelling at up to 50kmh. The choice of material is lighter and means you have far more luggage space.

It is a shame we won’t get the full-blown 306bhp TTS version as it has a sizable punch advantage under the right foot over the TFSI, which produces 227bhp from the same turbocharged 2-litre engine. But, either way, it has plenty of torque and lots of grip to keep enough fun in the driving.

Available in the United Arab Emirates from this month from Dhs 195,000, the styling represents the future direction of Audi with its larger grille, angular lines and LED headlamps. But the futuristic direction also flows inside with a new take on the instrument cluster.

Gone are gauges as we know them. Instead, the 12.3-inch LED display which normally resides in the centre console has been promoted to pride of place in front of the driver. In our case, it was firmly fixed onto a 3D render from Google Maps giving us instructions to navigate around Majorca. Just the speedo and tacho dials remain, relegated to minor roles in the corner.

It takes some getting used to, but I am sure it will become second nature to owners after a very short time. This is being phased in across the full Audi range and spells the end of secondary centre-mounted screens and even heads- up displays. Every piece of information is now contained in one unit right in front of your eyes.

In many ways, the new TT represents a lot of future thinking in the Audi brand; from the in-car display to the exterior styling and its latest development of the Quattro all-wheel drive system.

Optional on the 45 TFSI version, the new multi-plate clutch distributes power between the front and rear which can be adjusted by the drive select system. When in sports mode it not only tightens up the suspension and steering ratio but also sends more power to the rear wheels until it is needed up front, if traction is lost.

The TT has come along way in its three generations and no longer can this be considered a styling exercise like the original. The 2015 TT Roadster is a little test bed for what we will see in the Audis of tomorrow.