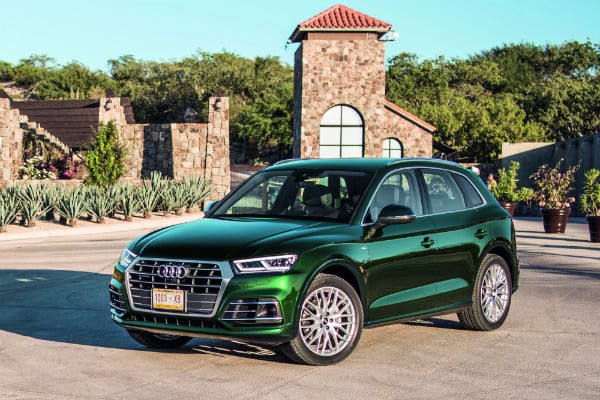 Despite the well-publicised budget cuts at Volkswagen, it seems there’s still enough in the kitty for big car launches if the reveal of the all-new Audi Q5 is anything to go by.

The Q5 is the most important model in Audi’s portfolio and could even be the most significant launch within the VW empire in 2017. The outgoing version sold more than 1.6 million units globally over its eight-year reign making it not only Audi’s best selling SUV but also surpassing the A4 as its best-selling car.

Set on the Baja Peninsula in Mexico not far from where it will be manufactured at a new state-of-the-art plant, the launch needed 25 cars to accommodate 50 journalists in our wave alone and as one slightly tired-looking Audi engineer confessed, our day was just one crammed into two and half solid weeks of media mingling.

The Q5 is new from the ground up and uses a shortened version of the latest, modular MLB2 platform it shares with the Audi Q7, A4, A8, VW Touareg and Bentley Bentayga.

It’s this new architecture which is largely responsible for the Q5’s weight loss of up to 90kg depending on spec, despite it growing marginally in width and height. It now weighs in at 1,720kg.

For a car that looks incredibly similar to the outgoing model, there’s not a single nut or bolt carried over. There is not only a new range of colours but also engine options, the next level of driver assistance packages and for the first time in this class adaptive air suspension as an alternative to the regularly coil sprung version.

Several engine options are on the table but the Middle East version is the 252bhp two-litre TFSi four-cylinder turbo with 370Nm of torque driving through a seven-speed dual clutch auto box.

This settled into a nice highway cruise mode for the several hundred kilometres of long distance travel we covered and is enough to get to 100kmh in 6.2 seconds and on to 237kmh.

The other big features on the new Q5 are its optional air suspension with adaptive dampers lifted off the Q7 and the new quattro all-wheel drive system.

The quattro system flicks between front-wheel and all-wheel drive, in a matter of milliseconds and the process is undetectable from inside the car.

The air suspension adjusts damper stiffness and has five ride height settings including a feature that drops the tail to make loading and unloading of the 610-litre space behind the rear seats easier. Using the rotary controller, the driver can select one of seven driving modes including two new lift/off road and all road modes.

While the outside may look similar, the interior lets you know this is a new canvas – most notably for the driver who now has Audi’s Virtual Cockpit in front instead of the conventional gauges. This 12.3-inch wide-screen digital display features navigation maps, infotainment programmes and driving assistance info in addition to a selection of gauges that scroll depending on the drive mode.

The infotainment system includes Apple CarPlay and Android Auto as well as a touchpad in addition to the rotary control to access a series of shortcut menus. Meanwhile the MLB2 platform provides occupants with more head, shoulder and knee room.

Until now the Q5 was starting to show its age against a sudden brace of newcomers like the Jaguar F-Pace, Mercedes GLC and Porsche Macan.

While it lacks a bit of room in comparison to the F-Pace and perhaps some ride comfort to the GLC, it should come in at a more favourable price point to all three when it hits the road in the third quarter of next year.