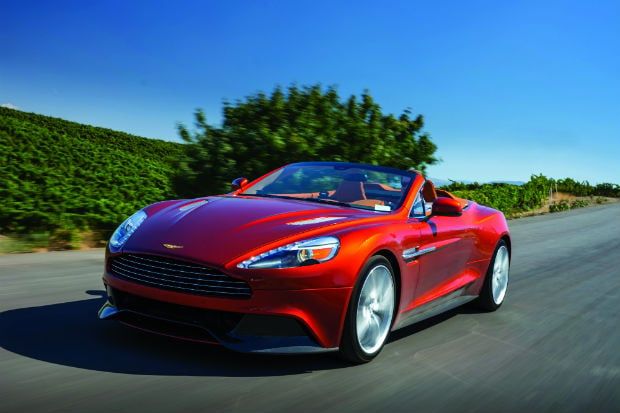 Folding back the roof on a car like the Aston Martin Vanquish does more than let the sunshine in. It exposes the senses, and for me it is the sense of hearing that is most tingled by the noise the convertible Vanquish erupts with.

It is not the noise of the electric roof motor or even the wind buffeting your head, but the burble on start up of its 6-litre V12 engine, which later becomes a full-on howl at top speed.

Luxury car manufacturers have told our generation of drivers that silence is golden so often that I fear some of us may have forgotten the aural joys you can experience from a 565bhp, hand- built precision tool doing its thing.

As is Aston Martin tradition, the Volante badge is reserved for its convertible version. Other than a chopped top, this model is pretty much identical to the seductive Vanquish coupe.

Aston Martin says it virtually designed the coupe to be a convertible from the start and so it doesn’t carry the usual deficits of convertibles with a soggy chassis, extra weight for strengthening or a tiny boot that has to stow the roof.

Thanks to its full carbon fibre construction, the car weighs just 9kgs heavier than the hard top and covers the distance from zero to 100kmh in the same 4.1 seconds while topping out at an identical 295kmh.

Aston claims that stiffness is up by 14 per cent over the DBS Volante it replaces and it’s noticeable in the lack of scuttle shake.

It’s not a lithe Porsche chaser but more of a country lane cruiser and if you want the white-knuckle ride, there’s always the more nimble, V12 Vantage S.

Styling cues such as the elegant waist, elongated side strakes and LED rear light blades are derived from the Aston Martin One-77 supercar while the folding fabric roof sits beneath a tonneau and decklid that have been aerodynamically tweaked for better performance.

Each body panel is constructed from carbon fibre not just because of its high strength-to-weight ratio but also for its flexibility of form. This reduces mass and means that fewer individual body panels are required.

You feel wrapped in the car with its high beltline and high centre stack. Visibility all-round is good and obviously improved when the roof is lowered.

Finding those twisty back roads brought the smile back big time, helped in spades by the adaptive damping system that is selectable by the driver.

Here, Normal is the default setting, but switching to Sport or Track modes brings the hydraulically assisted Servotronic steering system into line by becoming firmer.

The fun really begins as the car transcends its Grand Tourer status, where it competes with the likes of the Bentley Continental GT convertible, and brushes with supercar status. Ride quality does suffer slightly as things tighten up but that’s not really your priority when punting it along.

Beyond Sport, there is a Track mode, which allows more slip in the Traction Control (TC) software for a bit of tail out action and if you really feel up for it, you can turn off the TC altogether and let it all hang out.

The transmission is a conventional automatic unit, rather than an automated manual used in some high-end cars including the little brother Vantage, but it works a treat in the more leisurely Vanquish and offers seamless shifts in auto or manual modes that are controlled with column-mounted paddles shifts.

For Dhs1.1 million, this beauty is yours. If you do have that kind of capital, drive it like I would – descend low down into the driver’s seat, push the clear, glass-like start key to ignite the sound of that luscious V12 engine, catch a glimpse of its arrow-like profile in the shop window, and burn away to chase the hills.