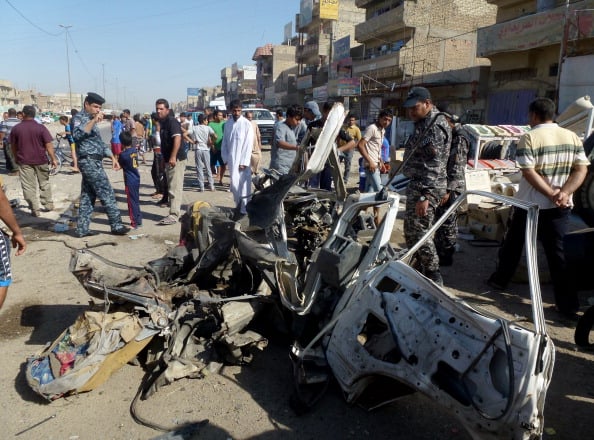 A series of car bombs in Baghdad killed 57 people and wounded more than 150 on Saturday, in what appeared to be coordinated attacks on people celebrating the end of the Muslim fasting month of Ramadan.

The 12 separate blasts targeting markets, busy shopping streets and parks where families like to mark Eid were part of a surge in sectarian violence in Iraq since the start of the year.

This has been one of the deadliest Ramadan months in years, with regular bomb attacks killing scores of people, especially in the capital. The latest bombings were similar to attacks in Baghdad on Tuesday in which 50 died.

More than 1,000 Iraqis have been killed in July, the highest monthly death toll since 2008, according to the United Nations.

The Interior Ministry has said the country faced an “open war” fuelled by Iraq’s sectarian divisions and has ramped up security in Baghdad, closing roads and sending out frequent helicopter patrols.

Eighteen months since the last U.S. troops withdrew from Iraq, Sunni Islamist militants have been regaining momentum in their insurgency against the Shi’ite-led government, and have been emboldened by the civil war in neighbouring Syria.

On Saturday, the president of Iraqi Kurdistan said his region was prepared to defend Kurds living in neighbouring Syria, in what appeared to be the first warning of a possible intervention and a further sign that the conflict is spilling over Syria’s borders.

Outside Baghdad, a suicide bomber detonated a bomb in a car on a busy street in the town of Tuz Khurmato, 170 km (105 miles) north of the capital, killing at least 10 people and wounding 45, medical and police sources said.

Tuz Khurmato is located in a particularly violent region over which both the central government and autonomous Iraqi Kurdistan claim jurisdiction.

Police believe the bomber was trying to reach the local headquarters of a Kurdish political party, but was unable to reach the building because of increased security in the area, a police source said.

In the town of Nassiriya, 300 km (185 miles) southeast of Baghdad, twin car bombs near a park killed six people and wounded 25, police and medical sources said.

Pictures showed metal shop fronts contorted by one of the blasts, with blackened scraps of debris littering the ground. Two tyres on an axle were all that was left of one of the cars used in the attack.

Car bombs also hit the Shi’ite city of Kerbala, killing four and wounding 11, and targeted a Shi’ite mosque in the northern city of Kirkuk, killing one worshipper and wounding five.

Tensions between Shi’ite, Kurdish and Sunni factions in Iraq’s power-sharing government have been rising, and the renewed violence has sparked fears of a return to the sectarian slaughter of 2006-2007.

Iraqis have endured extreme violence for years, but since the since the start of 2013 the intensity of attacks on civilians has dramatically increased, reversing a trend that had seen the country grow more peaceful.

In recent months insurgents have moved beyond attacking shopping districts to targeting youths playing football and people watching matches on television at the Baghdad cafes which have dared to stay open.