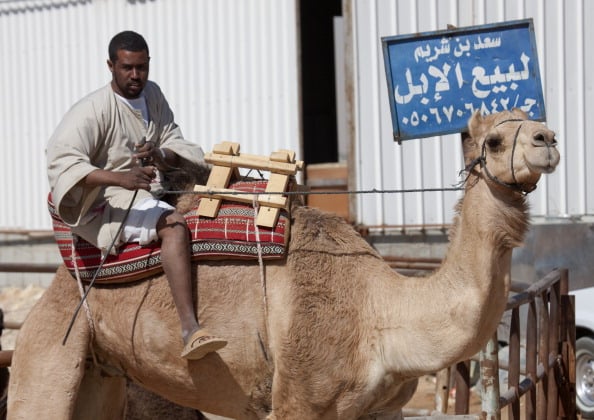 People infected with a deadly virus that emerged in Saudi Arabia last year may have caught it from one-humped camels used in the region for meat, milk, transport and racing.

In a study into what kind of animal “reservoir” may be fuelling the outbreak in humans, scientists said they had found strong evidence it is widespread among dromedary camels in the Middle East.

The Middle East Respiratory Syndrome Coronavirus (MERS-CoV), which can cause coughing, fever and pneumonia, has been reported in people in the Gulf, France, Germany, Italy, Tunisia and Britain.

The World Health Organisation (WHO) says 46 people have died out of a total 94 confirmed cases, the majority in Saudi Arabia.

“As new human cases of MERS-CoV continue to emerge, without any clues about the sources of infection except for people who caught it from other patients, these new results suggest that dromedary camels may be one reservoir,” said Chantal Reusken of the National Institute for Public Health and the Environment in Bilthoven, the Netherlands, who led the study.

“There are different types of contact of humans with these animals that could lead to transmission of a virus.”

Experts not involved in the study hailed its findings as a major step towards solving the mystery of the MERS virus and, ultimately, controlling it.

The WHO welcomed the study but said it had not provided any insight into how humans become infected. Most people with the disease became infected through contact with other people, while most of those not infected by other humans did not have contact with camels either, WHO spokesman Tarik Jasarevic said.

“What this study has shown is antibodies in the camels, that means that camels have been infected at some point in time and that produced antibodies,” he told a news briefing in Geneva on Friday.

Other animal species may also be infected, he said.

FROM BATS TO CAMELS TO HUMANS?

Days after identifying the new virus in September in a Qatari patient at a London hospital, British scientists had sequenced part of its genome, mapped out its “phylogenetic tree” and found it was related to a virus found in bats.

Further work by a scientists at Germany’s University of Bonn suggested it may have come through an intermediary animal after they conducted a detailed case study of a male patient from Qatar who said he owned a camel and a goat farm.

“This looks like the big break that public health workers needed in the fight against the spread of MERS,” said Benjamin Neuman, a microbiologist at Britain’s University of Reading.

“The biggest mysteries … have been how people are becoming infected with a virus of bats, and why it is happening in the Middle East. By showing that one-humped camels have a history of MERS-like infections, these scientists may have helped answer both questions at once.”

The Dutch-led team, whose study was published in The Lancet Infectious Diseases journal, gathered 349 blood serum samples from a variety of livestock animals, including dromedary camels, cows, sheep, goats, and some animals related to dromedaries.

The animals were from several different countries, including Oman, the Netherlands, Spain and Chile.

While no MERS-CoV antibodies were found in blood serum taken from 160 cattle, sheep, and goats from the Netherlands and Spain, they were found in all 50 samples from camels in Oman.

The Oman samples came from different areas, suggesting that MERS-CoV, or a very similar virus, is circulating widely in dromedary camels in the region, the researchers said.

Neuman said the antibodies showed that the camels from the Middle East had probably caught a MERS-like coronavirus, but could not tell scientists when that happened or whether it was exactly the same as the virus that has spread to people.

“There was some anecdotal evidence of people who came down with MERS after contact with sick camels, but this is the first hard evidence that camels may be a missing link in the chain of transmission,” he said.