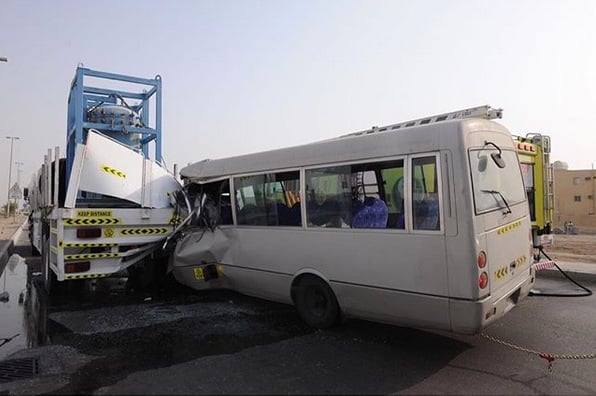 A bus driver died in a traffic accident in Abu Dhabi on Sunday, after his vehicle collided with a truck trailer at Mussaffah Industrial Park, the Abu Dhabi Police said.

Lieutenant Colonel Dr. Abdullah Yousif Al Suwaidi, deputy director of the Department of Traffic of the External Areas in Abu Dhabi, said that preliminary investigations revealed that the accident took place after the truck hit the front of the bus, which was parked on the road.

The command and control centre of the Abu Dhabi Police received a report on the incident and officials transported the deceased, of Asian nationality, to Khalifa Medical City in Abu Dhabi, a statement said.

Al-Suwaidi called on motorists and road users to avoid being distracted by driving, not to stand in the middle of the road, and to choose the right place to stand in during emergency situations to avoid serious traffic accidents.

The UAE’s Ministry of Interior has launched the ‘Summer without Accidents’ traffic campaign across the country to raise awareness among motorists to reduce accidents during the summer.

The campaign includes awareness exhibitions and lectures, distribution of traffic safety and medical brochures and sending SMS and tweets through social media platforms.

In line with that the Abu Dhabi Police confirmed that it has conducted 114 traffic awareness and safety programmes, urging motorists to undertake routine maintenance of their vehicles and adhere to safe driving practices.

On Saturday, Abu Dhabi Police said the campaign has reached 49,000 people in the emirate.