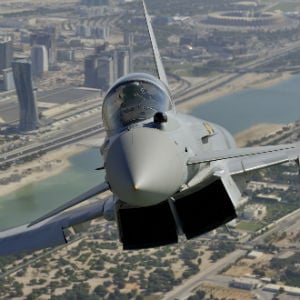 Britain’s BAE Systems Plc signed a bigger than expected contract worth around 2.5 billion pounds ($4.1 billion) to supply aircraft to Oman, its first major deal since the collapse of a $45 billion merger plan.

Europe’s largest defence contractor is hunting for growth as a standalone company after in October failing to complete a tie-up with EADS, the Franco-German maker of Airbus civilian jets.

BAE said on Friday that the Omani contract, widely expected after talks regarding the deal were flagged earlier in the year, provided for the delivery of 12 Typhoon and eight Hawk aircraft to the country’s armed forces starting in 2017.

The Omani order was larger than some had forecast. Analysts at brokerage Investec said they had expected BAE to chalk up a two billion pound deal, while David Reeths at specialist defense publisher IHS Jane’s said the addition of the Hawk trainers was a surprise.

“This is a very important sale for Eurofighter as there is only a limited number of fighter competitions out there,” Reeths said. “There is a bit of a price war going on and it is a buyer’s market, but it is also an industry where success begets success.”

However the deal comes days after BAE warned of a delay in reaching an agreement with Saudi Arabia over the pricing of an even bigger order, a contract for 72 aircraft worth around 4.5 billion pounds.

BAE said on Wednesday its 2012 earnings could take a hit should it not reach an agreement with Saudi Arabia on pricing in the next two months, something it had expected to conclude in the second half of this year.

Like other defence firms, BAE faces tough times as the U.S. and other western governments cut defence spending as part of their broader quest for budget savings, pushing the company to chase orders more aggressively in other markets such as the Middle East.

The Typhoon, formally called the Eurofighter Typhoon, was developed by a consortium of BAE, Finmeccanica of Italy and EADS, which represents Germany and Spain in the European project.

The plane, which competes against U.S. firm Lockheed Martin’s F35 Joint Strike Fighter (JSF), has to date been exported to Austria and Saudi Arabia and is looking for new customers.

The Omani deal follows a high-profile visit in November by British Prime Minister David Cameron to the Gulf and Middle East, during which selling the BAE-built Typhoon was high on the agenda.

Cameron’s office said at the time that Saudi Arabia had signaled it was interested in placing a second “substantial” order of Typhoons, on top of the 72 jet order which is still subject to pricing discussions.

BAE officials also said the UAE has shown interest in placing an order for up to 60 Typhoons.