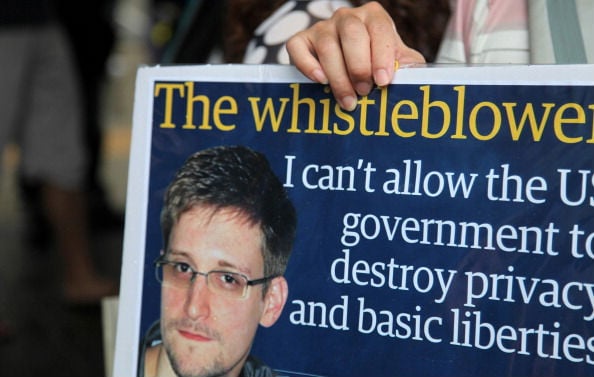 Britain runs a secret monitoring station in the Middle East to intercept large numbers of telephone calls, emails and internet traffic that it shares with intelligence agencies in the United States, the Independent newspaper reported on Friday.

Snowden’s leaks have sparked a global surveillance scandal that has pitted U.S. President Barack Obama against the Kremlin and prompted British Prime Minister David Cameron’s advisers to demand the return of secrets from the Guardian newspaper.

The London-based Independent, which did not say how it obtained the information from the Snowden documents, said the British had tapped into the underwater fibre-optic cables which pass through the Middle East.

Britain’s foreign ministry and a spokesman for Britain’s eavesdropping agency GCHQ declined comment. Data gleaned from the monitoring station, whose exact location the Independent said it would not reveal, is then passed onto GCHQ in Cheltenham, England, and shared with the U.S. National Security Agency.

Snowden’s leaks have embarrassed both Britain and the United States by laying bare the extent of their surveillance programmes. London and Washington say their spies operate within the law and that the leaks have damaged national security.

Western intelligence agencies rushed to improve their monitoring of Middle East traffic after the attacks on the United States on Sept. 11, 2001.

A network of worldwide cables pass from Britain and the United States through the Mediterranean, running via the Suez canal linking India and the Far East, according to a map from fibre-optic cable providers, Alcatel-Lucent.

In the Middle East, underwater cables from the sea link into a number of points on land including Tel Aviv, Athens, Istanbul, Cyprus and several Egyptian cities.

Telecommunication links between countries were expanded during the British empire in an attempt to link its colonies.

Britain still has two areas of sovereign territory in Cyprus with a NATO military base in south east Turkey.

Britain’s monitoring station in the Middle East was set up under former Foreign Secretary David Miliband, who served in that post between 2007 and 2010, the Independent said.

The Guardian newspaper previously reported in May that GCHQ had tapped fibre-optic cables and shared personal data with the NSA under a project codenamed “Tempora”.

British police said on Thursday that documents seized from the partner of a Guardian journalist who has led coverage of Snowden’s leaks were “highly sensitive”, and could put lives at risk if they fell into the wrong hands.

Counter-terrorism detectives said they had begun a criminal investigation after looking at material taken from David Miranda, partner of American journalist Glenn Greenwald, during his nine-hour detention at Heathrow Airport on Sunday.

Miranda, a Brazilian citizen who had been ferrying documents between Greenwald and a Berlin-based journalist contact of Snowden’s, was held at Heathrow under anti-terrorism powers. He was released without charge minus his laptop, phone, a computer hard drive and memory sticks. He later left for Brazil.