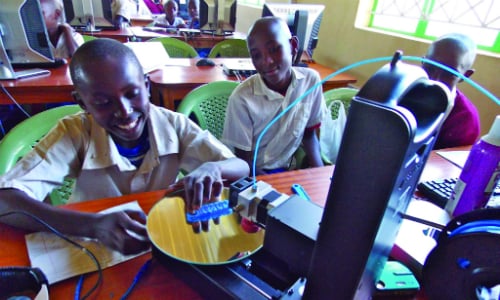 When people think of pioneering science, technology, engineering and mathematics education they are likely to picture schools in the United States or Europe. But, as pupils from schools in one area of Kenya have learned, you don’t have to attend a top global institution to be at the forefront of innovation.

The American-Kenyan not-for-profit organisation Kenya Connect has teamed up with US-based social enterprise Level Up Village to offer STEM and arts classes in 3D printing, coding, animation and video game design at its purpose-built learning resource centre (LRC) in rural Wamunyu. The state-of-the-art facility boasts the only computers available to students for 100km and stands in stark contrast to conditions available at Kambiti Primary School, one of Kenya Connect’s 55 partner schools.

As Kenya Connect executive director Sharon Runge explains in a blog on the Level Up site, pupils at the school have no electricity at home or in class.

Although, when she visited, they were familiar with traditional printing using paper, they had no concept of 3D printing technology. Soon, however, they were learning to use computer-aided design and a 3D printer to create key chains, chess pieces and even solar lights through a course called ‘Global Inventors’.

“For kids around the world, STEM might well be the pathway out of poverty. But children are very unlikely to take a path that is completely unfamiliar to them. Indeed, if there are no real role models in their communities who can demonstrate how an interest in STEM can lead to good jobs, then how can children be expected to take those career paths?” asks Level Up Village co-founder Neesha Rahim.

Under the curriculum, a Kenya Connect staff member was able to illustrate the geometry behind 3D modelling using a box to explain the axes. After this learning phase, the students became more comfortable with computer-aided design and were able to not only design an object but also print it out.

The ability to see their ideas materialise before their very eyes was considered a particular highlight of the class. According to Runge, due to a lack of resources, students in rural Kenya rarely have the opportunity to apply what they have learned in class. But the programme allowed them to participate in hands-on project-based learning using today’s cutting-edge technology. 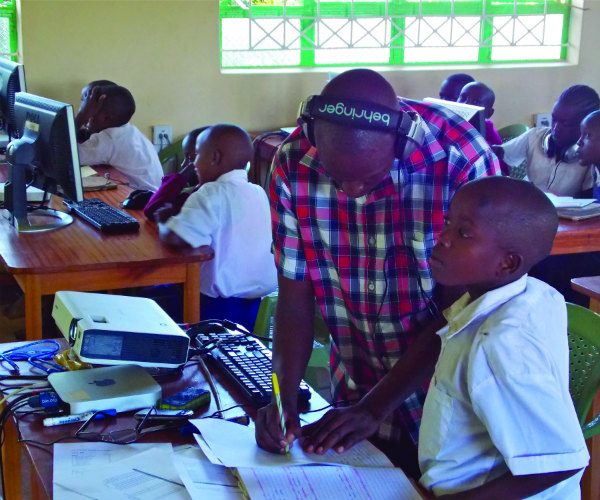 As Rahim explains, these advances are democratising the process of innovation and invention and becoming increasingly important for the future workforce.

“Prototyping used to be something only members of the elite, who could afford big factory production costs, could do. That is no longer the case with the advent of low-cost 3D printers. But it’s not really the actual printers that are changing the future of education; it’s the 3D design software,” she says.

“All of a sudden, 3D design is being used in industries from home decor to space travel and architecture to medicine plus robotics to virtual reality and much more.

“It is an important skill the children of today need to know – how to leverage 3D design and how to collaborate, and innovate, with other people. Those sitting right beside them as well as those who are across the globe.”

The results of the course have been impressive, Runge says. Students who took part are now more engaged in their education and have a better understanding of maths, especially in terms of calculating volume and area, according to observations from their teachers. But the curriculum is about more than just fostering creativity, building analytical skills and problem-solving.

It has been designed in partnership with schools in the West to provide opportunities for collaboration and to allow institutions the opportunity to give back.

A portion of the tuition fee paid is used to fund the same course and supplies to the global partner organisation, such as Kenya Connect, on the other end of the collaboration.

More than 100 schools in the US, several in Australia and one in the United Kingdom have signed up to the initiative so far and Level Up plans to approach UAE institutions this month.

“We came to the table with a very deeply held conviction that our children needed to connect with students from around the world, not only because it builds perspective but also because we saw that opportunities that blend global connections with project-based learning lead to greater engagement, greater curiosity and a sense of empowerment,” recalls Rahim when asked to explain the inspiration behind the initiative.

“We saw early on that a symbiotic relationship between donor and recipient could be built via a ‘take a class, give a class’ model that other social impact companies had already proven sustainable.” 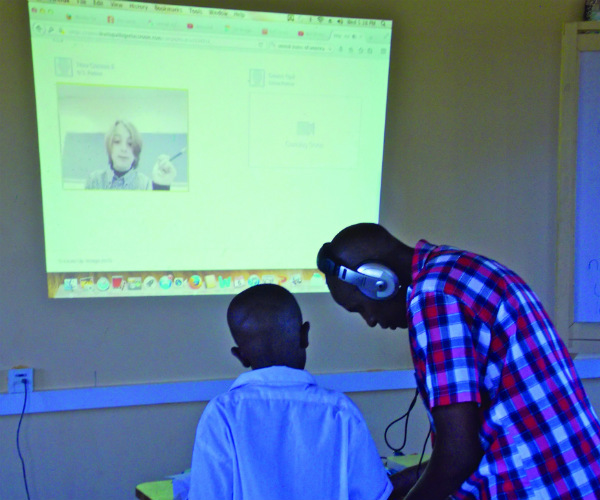 Pupils from Kambiti worked with their contemporaries at New Canaan Country School in Connecticut using video messaging for communication. According to Runge, each class exchanged video messages and pupils asked each other questions and shared details about their family backgrounds and hobbies.

Students in each country could also design their own projects, then have them edited by their partners on the other side of the world.

“Through this process, the Kenyan students have learned that even though they live in a different part of the world without many resources, they still share much in common with children in other countries. This has helped to seal the geographical gap between students and helped them to bond.

“It has also sent a powerful message that they are just one and the same people coming together to solve problems,” Runge says.

This end result shows just how far Kenya Connect has come since it was founded in 2002 as a non-profit organisation based in Maryland, US, and Wamunyu, Kenya. Where once it fulfilled its mandate to connect children in Kenya with those across the world via pen pal schemes using snail mail, now students can interact with each other globally via 3D design software and video messaging at the organisation’s learning resource centre.

The facility, which was completed in 2012, offered eight-week basic computer classes to more than 500 students and 130 teachers in the local area last year. However, while it may be able to offer STEM classes still unavailable even in many Western classrooms, the organisation’s next challenge is enabling more schools to access its facilities.

Kenya Connect is currently raising funds for a bus to help transport pupils at more distant schools to the LRC, with an eye to giving more students access to opportunities like those offered to Kambiti Primary School.

Kenya Connect and Level Up

Sean Canavan, global programmes manager for Level Up Village, explains how the two organisations came together

“We were introduced to Kenya Connect by a college student who worked for us and was familiar with the organisation’s work. From there, the relationship took off. Kenya Connect’s model of bringing 21st century technology and skills to rural Kenya is exactly in line with what we do at Level Up Village.

“We offered our first at Kenya Connect in September of 2015 and since then we have run more than a dozen classes with the organisation. Earlier this year, we helped them acquire a 3D printer for their learning resource centre so they could offer our ‘Global Inventors’ 3D printing course together with partner students in the United States.

“We have had great success with partners in Africa because there is a dire need for educational innovation. What our programmes do is make it easy for schools and organisations to move towards a student-centred STEM experience with a strong global exchange component.

“Level Up Village currently has 10 African partners in seven countries, some of which operate in multiple schools. We have several more about to start with us in the next few months. These include forward-thinking schools such as Gayaza High School in Uganda, which consistently wins national prizes in science and technology competitions.

“Other partners have taken Level Up Village courses to multiple schools. Exponential Education in Ghana is working with several different schools over a large geographic area with courses ranging from ‘Global Doctors’ [biology] and ‘Global Storybook Engineers’ [literacy/design] to ‘Global Inventors’ [3D printing] with students from ages 10 to 16.”