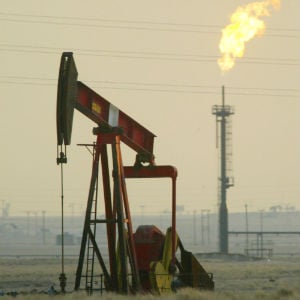 Brent crude oil futures slipped towards $66 a barrel on Tuesday, falling from a 2015 high, as Saudi Arabia considered halting bombing in Yemen to allow the delivery of aid, which eased concerns about oil supply from the Middle East.

A stronger US dollar also weighed on the dollar-denominated commodity, while investors waited for data on US commercial crude oil inventories later this week for more direction.

“The stronger US dollar and also news out of Saudi Arabia that they are halting the bombings in Yemen are two push-pull factors affecting the oil prices at the moment,” said Ben Le Brun, a market analyst at OptionsXpress in Sydney.

The Saudi foreign minister said on Monday the Saudi-led Arab alliance conducting air strikes against Houthi fighters in Yemen was considering calling a truce in specific areas to allow humanitarian supplies to reach the country.

Phillip Futures Energy analysts do not expect prices to change by more than one per cent on Tuesday as long as geopolitical tensions remain the same.

Investors are also waiting for inventory data out of the United States later this week, Le Brun said. “Obviously if we see a further tightening in supplies in the US, then that might be a catalyst to drive prices higher.”

Industry group the American Petroleum Institute will issue its own expectations for last week’s stockpiles on Tuesday, before official data from the government’s Energy Information Administration on Wednesday.

Investors are also waiting for the US nonfarm payrolls report for April due on Friday for clues on when the Federal Reserve may raise interest rates.

Still, oil price losses were limited by concern about supply out of Libya, with protesters shutting down the eastern Libyan port of Zueitina, one of the few Libyan ports still exporting oil.

A US delegation will visit Iran this week to review energy investment opportunities as Tehran negotiates a final deal with world powers on its nuclear programme.